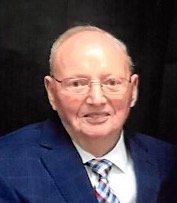 Family will receive friends from 1 to 2 p.m. Saturday, August 6, 2022 at Jasper First Baptist Church. The funeral will begin at 2 p.m. Bishop Harold Kelley and Reverend Lamar Cox will officiate. Words of love will be shared by Reverend Dexter Guin, Reverend Art Werner and Carson Roberts. Interment will follow at Oak Hill Cemetery.

Douglas was born on February 17, 1929. He worked as a truck driver and owned his own rig. He served in the United States Army in Korea from 1951 to 1953. He was a member of the VFW and a life member of the American Legion. He worked as a maintenance mechanic at Fayette Cotton Mill, superintendent of the Fayette Country Club and manager of the physical plant, as well as an assistant instructor at the Bevill State Junior College-Fayette campus. In his spare time, he enjoyed gardening and travelling. He visited all but one of the 50 states and several foreign countries.

He loved the Lord and served as a deacon and held various leadership positions in Fayette churches. He is currently a member of the First Baptist Church of Jasper. Douglas was a loving, caring and dedicated husband, dad, grandpa, dad and friend to so many.

He was pursued in death by his parents, William Brack and Nota Velma Pratt Stripling; and his brothers, Dorwood Stripling, JB Stripling, Vernie Stripling and Phillip Dean Stripling.

Kilgore-Green Funeral Home is responsible for all arrangements.

The family would like to thank Walker Baptist Medical Center and Kindred Home Health/Hospice for their care during his illness.

Parkland shooter’s prosecutor had bloody facts on his side