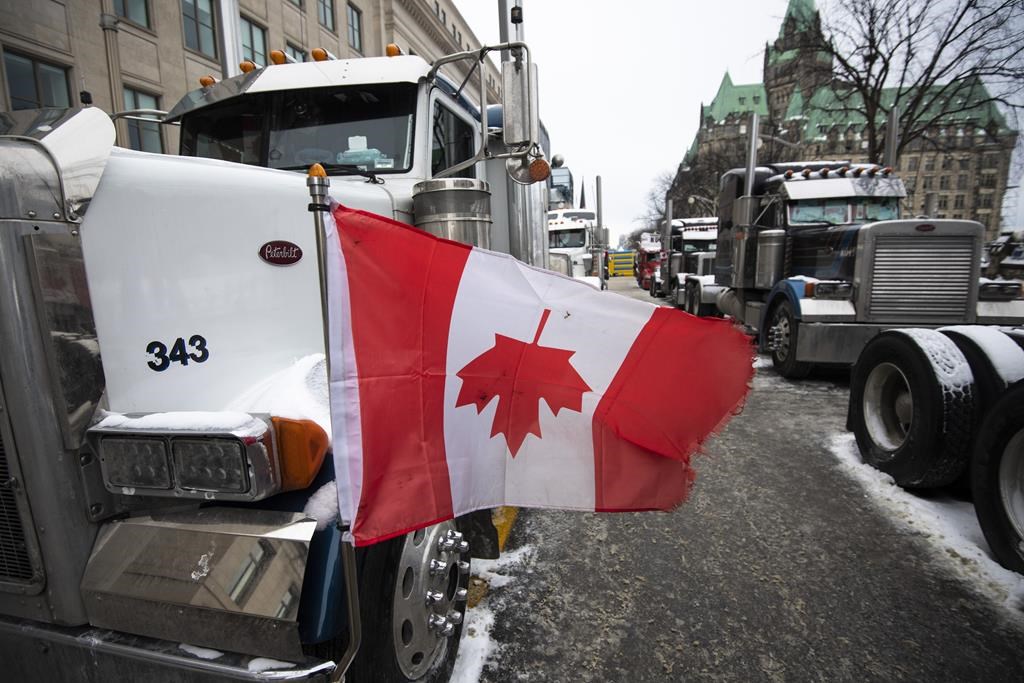 The symbolism attached to national flags often revolves around patriotism, but experts say the prominent appearance of the maple leaf during the COVID-19 mandate protests comes at a time of reflection for Canada.

Canadians may not be known as avid flag-wavers like their American neighbors, but the display of the maple leaf during protests on Parliament Hill and at border crossings gave some people pause, said Carmen Celestini, postdoctoral fellow at the Disinformation Project at Simon Fraser. University School of Communication in Burnaby, B.C.

“It’s definitely shocking to everyone and it really makes people think about who we are as a nation on so many different levels,” she said in an interview.

Get the best stories delivered to your inbox.

Our award-winning journalists bring you the news that matters to you, Canada and the world. Don’t miss.

Images of the flag waving from trucks, flying upside down or being worn as a cape have captured attention since the blockade began in Ottawa on January 28.

Celestini said most Canadians had a moment of reflection when it came to the flag, which began with the discovery of what are believed to be 215 unmarked graves at a former boarding school in Kamloops, British Columbia. The announcement led some cities to cancel Canada Day events. in a national assessment of the country’s colonial past.

The flag symbolizes freedom for truckers, she noted.

In the 57 years since it was first raised, the maple leaf has been hoisted by Olympic athletes in victory, wrapped around the coffins of soldiers returning from Afghanistan in an image of mourning, lit during demonstrations and worn on hats and sewn on travellers’ backpacks.

In Ottawa, it was affixed to the front of vehicles, sometimes with slogans scribbled on it, becoming for some an emblem of political affiliation.

Phil Triadafilopoulos, an associate professor of political science at the University of Toronto, said most of the flags flying at protests in Ottawa are the maple leaf, although there are a few others.

#MapleLeaf flies during protests, the flag is a collective symbol with individual meaning. #TruckerConvoy2022

“So, you know, what does that say about this sort of political orientation of the people gathered there?” He asked.

“I guess the vast majority of them see themselves as Canadian patriots in some way.”

It’s safe to say, he said, that those on the left of the political spectrum generally don’t make the same outward expressions of national identification as those on the right.

John Vile, professor of political science and dean of Middle Tennessee State University, said the flag is “not quite an empty vessel” as a symbol in the United States and other countries.

“A lot of people are pouring their ideas into what they consider to be the most basic and lofty aspirations in the symbol, including freedom,” he said.

While a flag is intended as a symbol of national unity, Vile said it seems to be used more on the right than the left at this time in US history. This may in part be the result of athletes and others “kneeling” during the playing of the US national anthem as they question whether the flag has lived up to American ideals of freedom and justice. equality for all, especially people of color, he said. .

But American politicians of all stripes have long sought to wrap themselves and their policies in the American flag, he added.

“I think it would be tragic if it came to be seen as a purely partisan symbol,” he said.

Celestini said some of this symbolism has seeped into Canada from the United States.

This is reflected in the language and slogans used in Ottawa, including “Make Canada Great Again” and calls for Prime Minister Justin Trudeau to be tried for treason.

“That’s really the language that’s been articulated in the south in the last two elections,” she said.

Vile said the flags of all countries are inextricably linked with the idea of ​​nationalism and the love of country is not limited to one party.

“I don’t think liberals love the country any less than conservatives,” he said.

Celestini agreed, adding that the flag cannot be taken over by any group.

“It is the flag of a nation. The flag is definitely individual and definitely national.”

Triadafilopoulos said Canada isn’t as intense as the United States when it comes to waving the flag, but there is a sense of pride in its display.

He said he found it disrespectful for the flag to fly upside down and worried that a shared symbol would be appropriated by some to advance a narrow agenda.

“But I also know that the Canadian flag is important to many Canadians and will likely continue to serve as a common symbol that unites more than it divides,” Triadafilopoulos said.

“It’s one of those rare things that Canadians of all stripes feel quite comfortable and close to.”

This report from The Canadian Press was first published on February 17, 2022.

13 Big Bear Mountain Retreats for Your Next Alpine Getaway