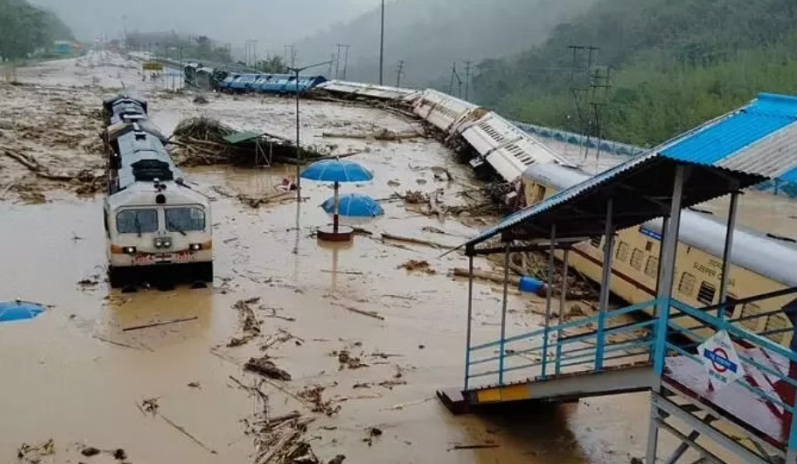 What happened to Assam’s only hill station, Dima Hasao?

Have you seen the pictures of New Halflong Station? Mud and slush from the hills have ruined everything. The trains that were at the station were also half buried in muddy water. The rains washed out the railway in 53 places. We do not know the exact number of deaths to date. The loss of life and property has not yet been estimated. It was said that the corpses of a few people were dug up under the rubble.

How could this be when one percent of the population owns 69% of the world’s wealth and 99% of people own only 31% of the total wealth? This is not possible under the circumstances of such perverse inequality. How do we see that one percent of people own almost 70% of the wealth? Is this a normal thing? Do they really need so much wealth? Not really. It’s nothing but profit. It is about controlling wealth and controlling power, politics and the economy. And what about the notion of unbridled consumption? Is it a necessary thing? Absolutely not.

As we said above, all we need is a healthy and peaceful life with dignity, freedom and identity. So this development model promoted by the 1% should not be applied everywhere. How can there be the same development model for Gurgaon and Dima Hasao? In 2005, this was discussed in detail by Professor Sanjib Baruah, who teaches politics at Bard College in New York in the chapter “Nationalization of Space: Cosmetic Federalism and the Politics of Development” in his book “Sustaining Disorder “.

In the name of development, hills have been destroyed, to build mega roads and bridges, trees have been uprooted and to generate electricity, mega dams have been built in our rivers. Our forests have been exploited in such a way that they can no longer hold the monsoon waters. In fact, the forest has just disappeared. If this continues what happened to Dima Hasao today, the same thing will happen to the entire northeast tomorrow.

It takes thousands of years to form the geography of a place. Then depending on its climatic conditions, human culture is formed. Forget all this if we impose a development model unsuited to local conditions, won’t it compromise everything? What happened to Dima Hasao today? It was such a lovely and beautiful place! But this place has been defiled by a cohort of businessmen and politicians, aided by local touts.

They destroyed the country and the forest there. Didn’t we hear a thousand basic scams from Dima Hasao just a few years ago? How sad! They dug the river beds with tractors. If they cut down the forest, erode the hills and carve out the riverbeds, what will be left of Dima Hasao?

The way this development juggernaut is unleashed in the northeast, it will crush everything under its wheels sooner or later. We need to seriously think about this. However, for now, our hearts and souls should be with the people of Dima Hasao. They need all the help from the government and also from us. They are in big trouble.

Matheran, Asia’s only car-free hill station, will soon have electric rickshaws on the roads