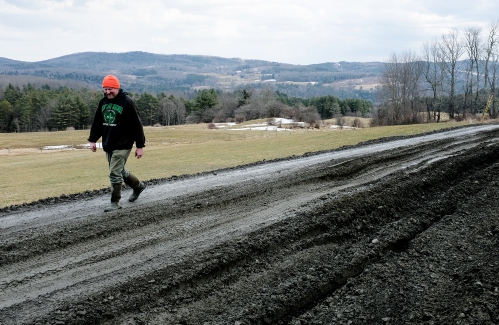 THETFORD – How bad are the gravel roads this mud season? Georgeann Faller can tell you.

Faller, a childcare provider, was returning from a grocery trip to western Lebanon on Wednesday evening with her boyfriend and her dog, a 12-year-old Chihuahua named Oliver, when her 2003 Nissan Sentra s was found stuck in the mud on Quinnipiac Road a few kilometers from her home in Thetford.

They couldn’t get cellphone reception from the location, so they moonlit walked—carrying Oliver all the way—to their home on Potato Hill Road, where they were able to call AAA. A few hours later, a tow truck arrived and towed the car out of the mud around midnight.

On Thursday morning, the patches of mud were so bad the couple called from work to avoid the car trip.

“I lived here for seven years, and I’ve never seen roads like this before,” Faller said Saturday. “But people I talk to who have been here a long time tell me it’s been like this before.”

But the story was not over. When the couple reappeared on Friday to join the frantic race, Faller’s car once again got stuck in the mud, this time on Robinson Hill Road, and again they were unable to get cell reception . They drove her boyfriend’s car to a store where they could get a signal to call AAA for the second time, but a Thetford policeman rammed the tow truck and dug up Faller’s car.

Northern New England is often said to have five seasons: summer, fall, winter, mud, and spring. As the snow melts and the ground thaws, the dirt roads – technically called gravel roads to distinguish them from paved roads – become oozing pools of gelatinous goop, threatening to strand vehicles in a snow trap. suction.

It’s been a particularly lousy mud season this year, say road agents and tow company operators, and there’s a reason.

In March, temperatures suddenly dipped from below zero, where they had been for much of the winter, to the low 60s, warming the surface of the ground. But the land is still frozen inches below the surface, and that frosty layer acts like a seal that forces the water table to turn the road into mud paddies, said Ted Kenyon, a contractor who said he pulled four cars with it. his tractor. out of the mud along Dairy Hill Road in South Royalton.

“I’m 80 and I’ve lived here for 55 years, and I’ve never seen the roads this bad,” Kenyon said on Saturday, adding “all the neighbors appreciate” that he’s available for the free rescue of vehicles. assignments. It also maintains Dairy Hill Road ‘as a service’ with its own fleet of heavy equipment.

Since Wednesday, alerts have been saturating Upper Valley social media groups and community Listservs with the latest bulletins on roads to avoid: three cars stuck on Turnpike Road in South Strafford on Friday; Wrights Mountain Avenue in Bradford ‘destroyed’; West Farms Road in Canaan “like quicksand”; Godfrey Road in Thetford “is getting rather miserable”; White Brook Road in Sharon “the worst I have ever seen”; Beaver Meadow Road from Sharon to Norwich ‘awful at both ends’; opinion against “in fact all Cornish dirt roads”.

At Woodstock, Elijah Lemieux, “in my first season of mud” as public works manager, said he and two other crew members went out Friday night to tackle patches of mud on the roads of the city ​​and Saturday had to close Prosper Road between Route 4 and Highway. 12 through traffic.

“It’s not impassable, but there is a chasm and a lot of riders use Prosper as a shortcut,” Lemieux said.

Kyle Blakeman, owner of Blakeman Towing in Tunbridge, said he had received “probably 100 calls” from stranded motorists since Thursday but could only answer about 25 of them.

“I’ve been doing this for 14 years, and this is probably one of the worst,” Blakeman said.

But there are roads that even tow truck drivers won’t take.

“If I get a call from Thresher Hill Road (in Randolph), that’s nothing I want to get involved in,” Blakeman said. “Quite honestly, I beat the shit out of my truck on some of these roads. And at 20,000 pounds, it’s only going to make the road worse.

Sharon Styles, from Thetford, described the mud factor on 5 Corners Road, where she has lived for 17 years, as hitting a ‘nine or 10’ on a scale of one to 10. On Friday morning, as she drove to the working as a cashier at Wing’s Market in East Thetford she was planning to take 5 Corners to Route 113 but an oncoming driver said there was a car stuck in the mud further down the road .

So Styles turned her 2009 Honda CR-V around and planned to take Robinson Hill Road instead, then turned around where she saw Faller’s Nissan stuck and backed up via Quinnipiac Road – the site of the original Faller debacle in the Wednesday night mud.

“I get on Quinnipiac and it was really deep ruts in there, really wet, and I went to the side and the light flashes and for some reason I remember staying on the gas and I think, ‘ Oh my god, oh my god, I’m going to be the one stuck on Quinnipiac,’ but I made it,” Styles recalled.

She said the ordeal and detour led her to arrive at work 15 minutes late, but in one piece. Still, “my heart was racing,” Styles said.

For Jackson, we’ll have a confirmation hearing with a side of civility, please.