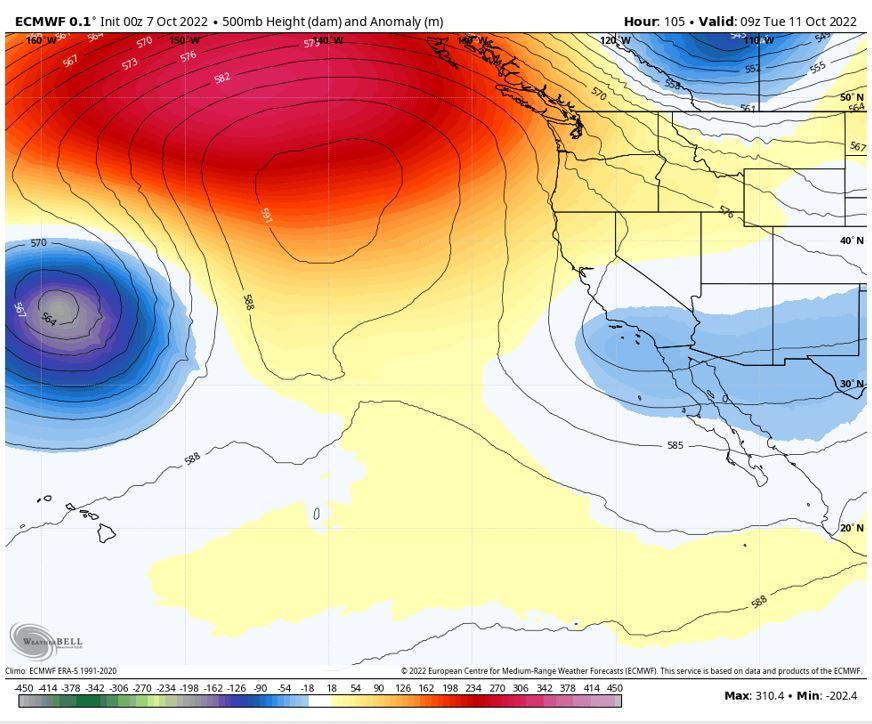 A foggy and calm weather pattern continues to hover over the coast and bays as Fleet Week draws to a close. This is an unusual October pattern, especially in the San Francisco Peninsula and Santa Cruz Mountains, as this time of year is normally dominated by Diablo winds which blow dry air and hot in the bay area. We’ve been spared the worst of the fire season so far, but weather models have been back and forth on the potential return of those dry winds early next week.

Oaklanders still remember the historic firestorm that decimated neighborhoods in October 1991, brought on by intense Diablo winds that blew through the hills of Oakland and Berkeley. As for the Bay Area as a whole, October is a month when red flag warnings tend to increase.

But recent weather events have really watered down the 2022 fire season.

In the past four weeks alone, the Santa Cruz Mountains and the Diablo Range have both recorded near-average vegetation moisture levels for this time of year, which is good news. The first big spike around mid-September was due to all the rain that rolled through northern California. And for a brief period at the end of the month, it looked like drier air was going to lower those humidity levels.

Instead, there was a second peak.

It’s because of all the fog that has been constantly rolling in the Bay Area for the past few days.

It’s unusual to see so much fog in October, and it’s largely a byproduct of all that moist air left over from the September weather evaporating from the valleys and passes of the Bay Area.

It also helps that the large scale weather pattern has been quiet thanks to the swing of the high pressure ridge to our west. This wobble is due to the competing forces of the North American Pacific (PNA) and La Niña oscillations, and the models are still angry about what these oscillations will shape for the Bay Area weather pattern this week. next.

For now, the weather patterns are pointing towards the offshore high, centered over the Gulf of Alaska. This means that a low over Mexico will be able to offset the high and provide a chance for beneficial rains and flurries in the Sierra Nevada.

As for the Bay Area, it still seems to be a mix between drizzles on the coast and peninsula and dry northeasterly winds filtering through the North Bay Mountains, East Bay Hills and the Santa Cruz Mountains. If the low stays closer to land, these winds will tend to be drier and bring a round of Diablos.

This is a complex weather forecast, but the main takeaway is that there is still a slight chance for dry Diablo winds around Tuesday and Wednesday. The good news is that in the battle between PNA and ENSO, it looks like the wet model is taking the lead for next week.

San Francisco:
The return of the fog. A quiet mist eavesdrops on the west side this Saturday morning as fog rolls into the Sunset and Outer Richmond districts. It will make for a chilly start to the day, with morning temperatures barely hovering around 50-53 degrees. The fog will then slowly dissipate around 10:00 or 11:00 a.m., changing to partly cloudy skies just in time for Saturday’s fleet events. Look for a 10-15 mph breeze off Highway 1 that keeps daytime temperatures in the low 60s all afternoon.

Going east of Sutro Tower, some of the west side fog will collect in Mount Sutro and Twin Peaks before lifting to partly cloudy skies after 10 a.m. . The sky should clear in time for some of the Blue Angels to be visible overhead.

Pacific Coast and Peninsula:
Dense fog and mist will make driving hazardous on Highway 1 Saturday morning. This pocket of low cloud and a bitter 15-20 mph sea breeze will bring morning temperatures into the 50s from Bolinas Lagoon to Pacifica. Skies are expected to remain mostly cloudy, but areas of clear skies will develop in the afternoon as highs struggle to reach the mid-60s.

Residents of the peninsula east of I-280 have a chance of dense fog along the gaps and passing around San Bruno before it moves away at 10 a.m. Look for sunnier afternoon skies, 10-15 mph winds and highs in the upper 60s from south San Francisco to Millbrae. A few towns sheltered from the wind in San Mateo and Daly City could see temperatures soar into the low 70s by the time some of the Blue Angels fly over the peninsula.

Heading south on the 101, look for Saturday highs in the 70s in Foster City, Redwood City and Atherton as a light breeze from the San Francisco Bay lands in the afternoon.

North Bay:
A gentle breeze off San Pablo Bay is expected to bring 5-10 mph winds to Petaluma, Napa and Sonoma after Saturday morning’s fog. This will help keep afternoon temperatures just below 80 degrees. All in all a great day to tour the wineries.

As for Marin and Solano counties, look for the low 80s by Saturday in Novato and south along the 101 including Mill Valley and San Rafael. Similar temperatures are expected east along Highway 37 to Vallejo. A growing delta breeze will keep temperatures in the mid-70s in Benicia and Cordelia, while Fairfield and Vacaville are expected to stay in the low 90s thanks to drier air filtering in from the Sacramento Valley.

East Bay:
Bursts of fog are on the way for the Berkeley Hills and Oakland Saturday morning through 10-11 a.m. The bay breeze is expected to pick up this afternoon, so towns along the I-880 corridor from Oakland to Fremont barely hit the 70s before the clouds return as the sun sets.

Residents east of I-680 in Antioch, Brentwood and Walnut Creek will see more gusts of 10 to 15 mph as the delta breeze gains momentum Saturday. This will mean mid 80’s by Saturday and afternoon clear skies to see all the passing fleet aircraft.

South Bay and Santa Cruz:
The Santa Clara Valley is in for a good streak of low cloud and fog along its foothills this Saturday morning. It will rise quickly before noon and give way to partly cloudy skies and a comfortable 10-15 mph breeze off the bay. Look for the upper 70s and low 80s in San Jose, Palo Alto, Sunnyvale, Cupertino and Milpitas this afternoon.

The breeze will struggle to penetrate further inland on Saturday, which means Los Gatos, Morgan Hill and Gilroy are on course for highs in the upper 80s to lower 90s. But nighttime temperatures are expected to drop rapidly, meaning lows will likely fall into the mid-50s. Quite a temperature difference between day and night!