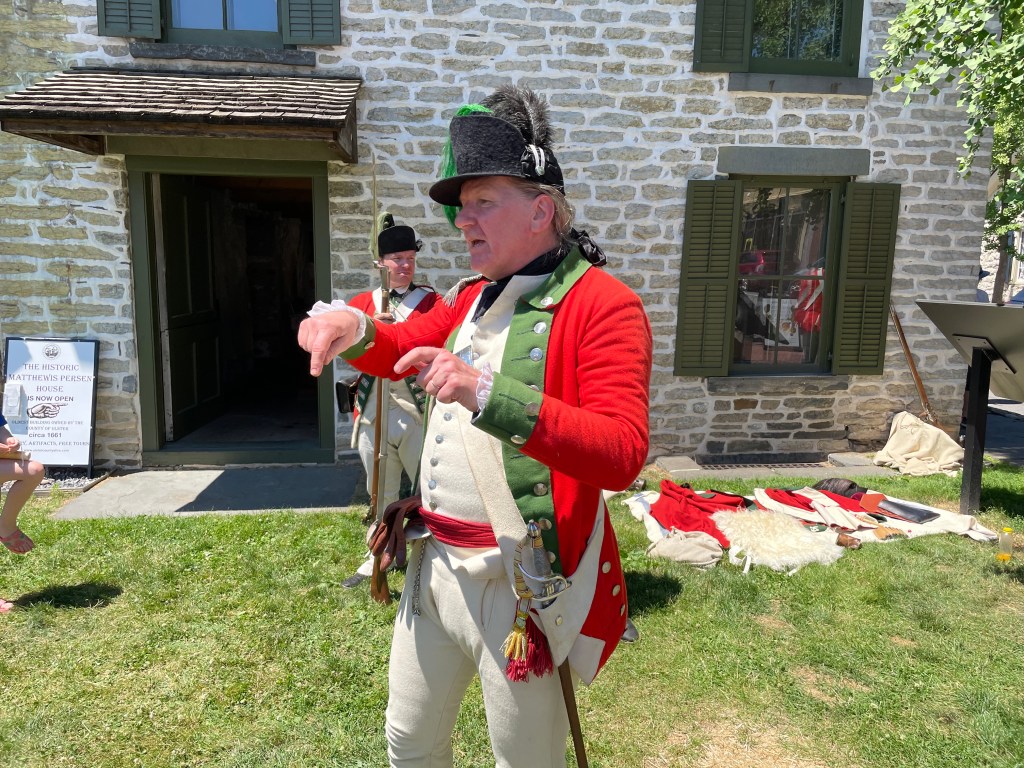 KINGSTON, NY — Members of the 24th Regiment of Foot Revolutionary War Reenactment Group were a hit with visitors to the Kingston Farmers Market on Saturday.

A small contingent of soldiers and officers stood outside the historic colonial-era Persen House in their hand-sewn vintage woolen red coats with green facings holding their muskets with bayonets pointed straight up at the sky . Some members of the public just took a quick look while others stopped to have a chat and hear about the Revolutionary War from a British perspective.

Some have asked about the Kingston Fire, when Kingston, then a village serving as the first capital of the independent state of New York in 1777, was burned down on October 16 of that year by British troops led by the General John Vaughan.

Joe Forte of Kingston has been a member of the regiment for five years, he said, while the recreated regiment was involved for many years in the re-enactment of the Kingston fire, the actual historical regiment was with Gen. John Burgoyne when he surrendered to the Continental Army at Saratoga in 1777, a key turning point in the conflict.

“You can only learn so much history when you are with the victors,” Forte said while explaining why he decided to join a British unit.

As he spoke with a guest, he explained how British soldiers adapted to warfare in the American colonies, such as scraping the tricorns associated at the time for a smaller cocked cap more suited to the more rugged terrain of the colonies. .

Paul Novotny, the group’s founder and commander, said he was happy to return to Kingston.

“It’s great to have the audience really talking about the story,” Novotny said.

“We’ve been here since day one and we’ve seen this and it’s amazing,” said Kimberly Helsing from Brooklyn as she tried on an extra regimental coat, which dates back to 1758 and still exists in the modern British Army to this day.

Dressed in period dress, complete with petticoats and whalebones, Laura Lunde, from Ballston Spa, spoke of the soldiers’ relationship with the farmers who owned the fields they passed through. She said that while the popular imagination envisioned soldiers simply stealing supplies and food, more often than not that was not the case.

“The army paid the farmers,” she said. “Sometimes farmers raised their prices. People weren’t a bit above the race.

A self-proclaimed history buff, Bill Hill, a Kingston native and Kingston High graduate who now lives in New Jersey, was visiting the Farmers Market when he came across the event and enjoyed talking to re-enactors.

“If we don’t know our history, we are doomed to repeat it,” Hill said.