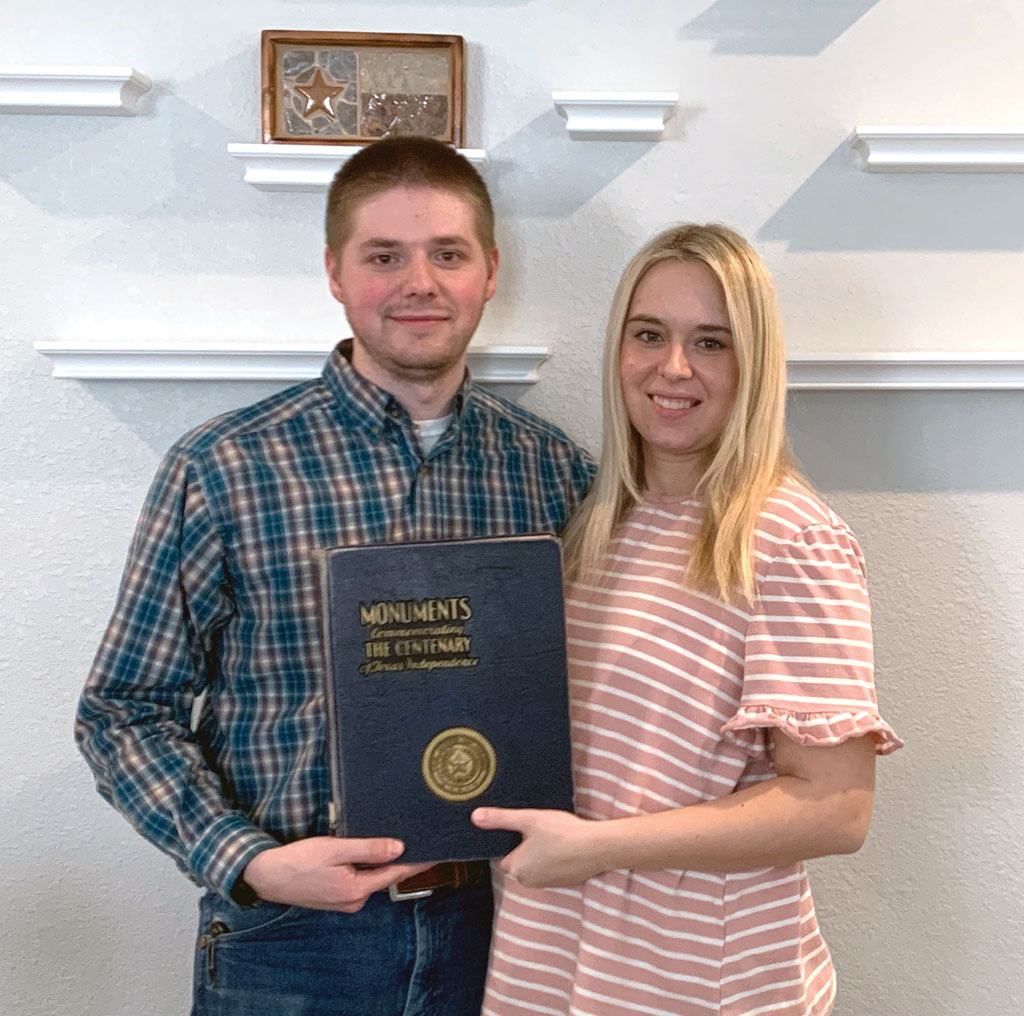 Preserving history is a passion of Cottonwood Shores residents Nichole and Michael Ritchie. The couple’s interest in the past has led them to unique discoveries and projects, including the rediscovery of one of Burnet County’s long-lost centennial markers.

“While everyone plays video games as a hobby, ours is actually going out and doing research or going to museums,” Nichole explained with a laugh.

Nichole, 27, and Michael, 26, met nine years ago when they were college freshmen. They lived in the same dorm at the time and quickly bonded over shared historical interests. Now, six years after their marriage, the couple are settling into their newly built home in Cottonwood Shores.

Currently, Nichole works as a history teacher in the Llano Independent School District, while Michael is a budget analyst for the Texas National Guard.

They began their historic hobby by restoring headstones when Michael was researching his roots and visiting the graves of his ancestors. One day they were at the grave of his fourth great-grandfather, just outside of Copperas Cove.

“We found his headstone, and it was completely covered in moss,” Michael said. “Nichole said I should clean it up, so we went home and started researching and researching what standards the VA uses in national cemeteries. From there we bought a ton of materials and headed out.

While the restoration of their tombstone was originally reserved for family members, it has grown. The Ritchies also clean the graves of World War II veterans and those who probably don’t have anyone visiting. They must, however, be careful of the graves they clean.

“Texas state laws on this stuff are very vague,” Michael explained. “If you have a connection to a parent, basically you have free rein to do whatever you want. So if I’m remotely linked to someone, it’s easy to do. Then from there if we go to a cemetery we try to pick any military gravestone we can find from WWII or before because at that point there’s no one there who goes there. Anything newer than that we will usually seek permission from a relative, or some cemeteries have a cemetery association who can give you permission.

The Ritchies have cleaned several local headstones since arriving in the area about three years ago. In fact, last year they volunteered with “Legends of the Falls,” a theatrical wagon ride through the history of Cottonwood Shores and, with the city’s permission, began cleaning up and restoring several tombstones in the Fuchs Cemetery. The site was used as a staging area for part of the cart ride.

In another major local project, the Ritchies relocated one of Burnet County’s long-lost centennial markers, which they found with the help of a book given to them by a friend and enthusiast. ‘story.

Titled “Monuments Commemorating the Centennial of Texas Independence,” the book was published by the Texas Centennial Celebration Review Commission in 1936 to mark 100 years of the state. A detailed list of the locations and inscriptions of all the centennial markers distributed across the state 86 years ago is typed on now flimsy and worn pages.

According to the book, two centennial markers were placed on US 281 in Burnet County: one north of the town of Burnet that commemorates the founding of the county and another south of Marble Falls to commemorate Granite Mountain. Both were missing.

One day the couple decided to see if they could locate the Granite Mountain marker. Using the coordinates given in the book, they ended up somewhere behind La Quinta Inn, 501 FM 2147 West in Marble Falls.

“We stopped and started walking up the hill right there,” he continued. “Of course you could see the (marker). He just came down the mountain.

The couple speculates that the marker, which became the property of the Texas Department of Transportation after the centennial commission disbanded, was lost when the US 281 bridge was widened decades ago. After reporting their findings, the couple worked with TxDOT, the Burnet County Historical Commission and county officials over the past two years to move the marker to a more suitable location, which in this case will be just outside the main entrance. of the Burnet County Courthouse.

“The reason we’re doing it is just to preserve (history),” Nichole said. “We think it’s really important because, you know, a guy just knocked it off the mountain like it didn’t matter. It will be nice to bring this – even just for tourists – to show what Burnet County is all about.

“Sometimes on eBay there are really weird collections of something random that become cool 50 years later,” he said. “It happens because a person cared 50 years ago to save something that no one cared about then. I see the same thing happening here. Eventually people are going to care at new. It’s about preserving something that was put there for a reason in the past. And you show that one person, two people, can make a difference.

Avanti releases ‘Another Side of Britain’ e-brochure for FIT Travel