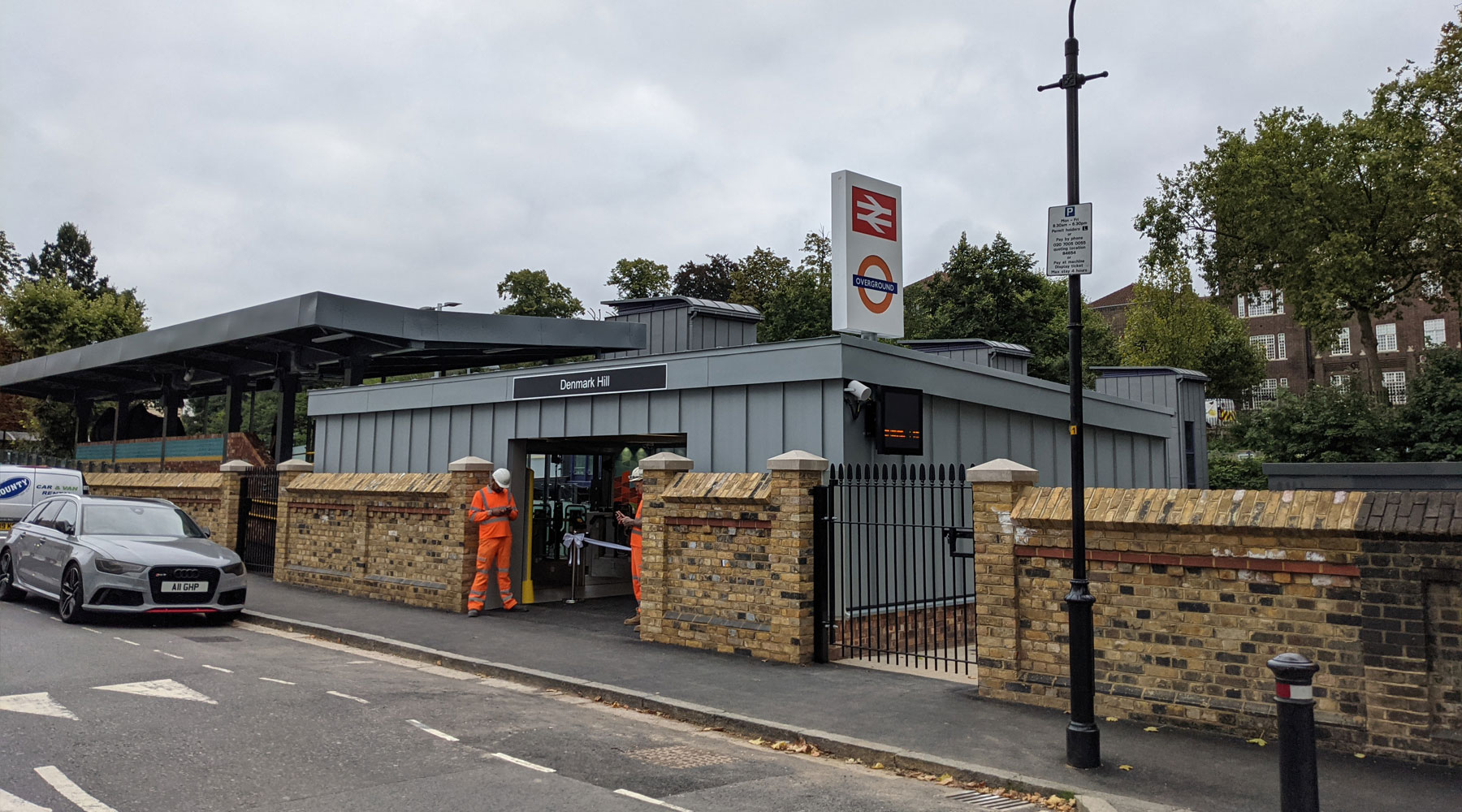 Opening of the new second entrance to Denmark Hill station

The crowded Denmark Hill station in south London gained a second entry this morning, which will help ease peak-hour congestion and reduce journey time to the station for most of its passengers .

Denmark Hill station has an exit on the south side of the station, which opened ten years ago when lifts and a new walkway were added to improve accessibility. Even then, four standard gates and one wide in the ticket barrier seemed a mistake, and the ever-increasing number of passengers in recent pre-pandemic years led to congestion in the station.

Sometimes it can take up to 10 minutes to get in or out of the station, and apart from the inconvenience for passengers, there is a security issue with the crowds on the platforms and on the rather narrow sidewalk outside. outside the station.

The opening of a second entrance on the other side of the station not only doubles the number of ticket barriers, but will also, in a few years, reduce travel time to and from the station, as around two-thirds of Passengers approach the station from the north side and are currently heading towards the south entrance. This will remain a problem until around 2023 when a hospital construction site will be completed and a closed trail will be reopened. When the trail opens it will remove about 200 yards from the trail for most people.

The new entrance is a gray metal box that matches the design of the other entrance and comes with an external train timetable display screen oriented towards how most people are likely to approach the entrance.

It may not look causal but a lot of work has gone into the brick wall which had to be partially demolished for the new entrance to be built and has been rebuilt to its original design with heritage gates partly funded by The Railway Heritage Trust.

Inside, there are four gates and a wide gate. There is no ticket office in the new entrance, but there are two video help screens on either side of the ticket barrier that connect to the staffed ticket office. Inside the entrance, the walls have been decorated with a mix of colored and plain white trapezoid tiles based on the Camberwell Brick, a local branded design which was introduced locally in January 2020. A roof wood and glass windows overlooking the train tracks brighten the effect.

There is also poetry on the glass panels – an excerpt from The Test by Una Marson, a poet, journalist and activist who lived locally. She was also the BBC’s first black presenter when she joined their overseas service during World War II. There is a blue plaque on his house in nearby Brunswick Park.

A staircase leads to the catwalk leading to the platforms, and a ramp runs around the side for those who cannot use the stairs.

Up on the slope is a new public artwork produced in collaboration with the Camberwell Society and Camberwell Arts, by British-Ghanaian artist Godfried Donkor, using traditional Adinkra symbolism from Ghana.

At the bottom of the station, new canopies have been constructed along three of the platforms where people are more likely to wait for trains, with the aim of helping to distribute people along the platform when the weather is bad. Solar panels have been added to the roof, which should make the new station entrance carbon negative in terms of electricity generation.

The overall effect is a station of two halves. The older half with its original ticket office – now a pub – and original stairs and canopy, then half way up it becomes modern with the ten year old stairs and lifts, and now the new ones awnings.

The cost of the new entrance and associated works was £7.5 million. Structurally, it is a modest-looking building, but had to face a listed heritage wall and be built on a steep slope. However, the modesty of the building belies its likely impact on the local community which will not only have far less congestion at peak times but also, when the closed footpath reopens – with a £1million redevelopment from Southwark Council – the new entrance will save a lot of walking time for the majority of passengers.

Also next to the new entrance is a large secure area for 85 bikes, partly funded by Sustrans and local hospitals. Users will need to request a security key fob in order to open the door to the bike racks.

The new entrance to Denmark Hill station was officially opened by Minister for Railways Chris Heaton-Harris, who was joined by local resident Sandi Toksvig as well as actress Danielle Arthur-Kennedy who read the extract of poem which is in the station.

Staircase and stepless ramp leading to the walkway

A small set of seats half way up the ramp as even the ramps can be tiring for some people.

How to use the Hill-Top Farm Map