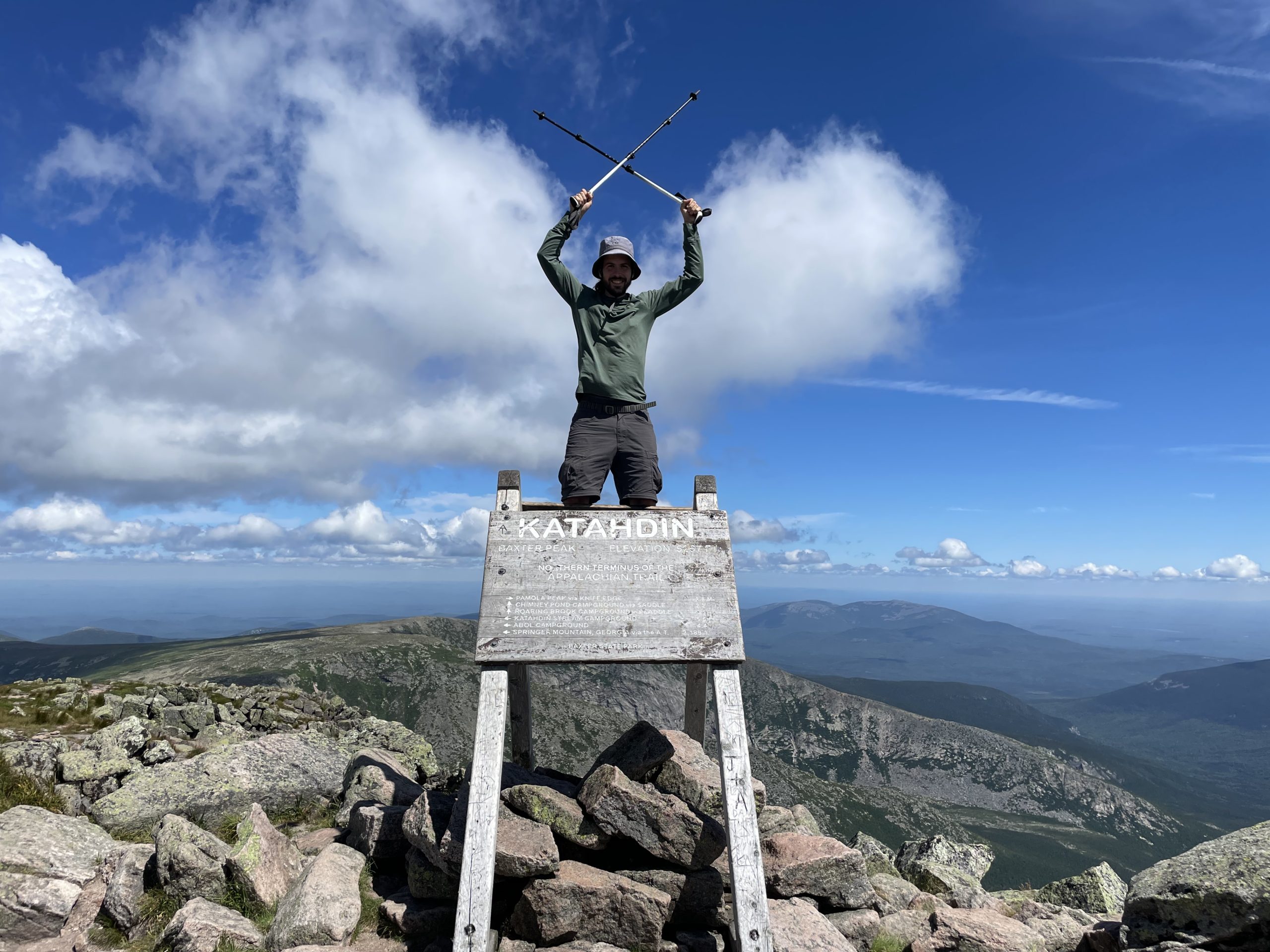 Katahdin: the big mountain at the end of the trail

I waited a day at Abol Bridge for friends to catch up with me, friends I had made at the start of my trip who always seemed to be just a step behind me. There was Pantless, whom I had first met at Nantahala; his friend Shim; Goodall, who met me the first day approaching Springer; and Stomps, who debuted with Pantless and Goodall on the “Lil Zippers” series. Since then they had split up, joined other trail families, scattered again and somehow reunited for this final stretch in Maine.

My wife met me at Abol Bridge with our car. We went to Millinocket for a meal along the bumpy gravel logging road. When we got back, the others were there, and we agreed to meet at 3:30 a.m. before they crossed the road to the state campground (which had cheaper rates). Of course, I didn’t get much sleep that night, but I slept well.

Walk in the light of the stars

I woke up to brilliant starlight, seeing the Pleiades and planets spread across the sky. Katahdin was a shadow on still water under the stars. I walked down the trail to the Baxter entrance station and saw the others approaching as I filled out my registration.

Soon we were all descending the gentle path in the dark light, following first the river, then the noisy Nesowadnehunk stream. We only stopped once or twice, and before I knew it, the sun was up and we were near Katahdin Stream Campground. It was 6:45 a.m. when we arrived, and we had walked ten miles. 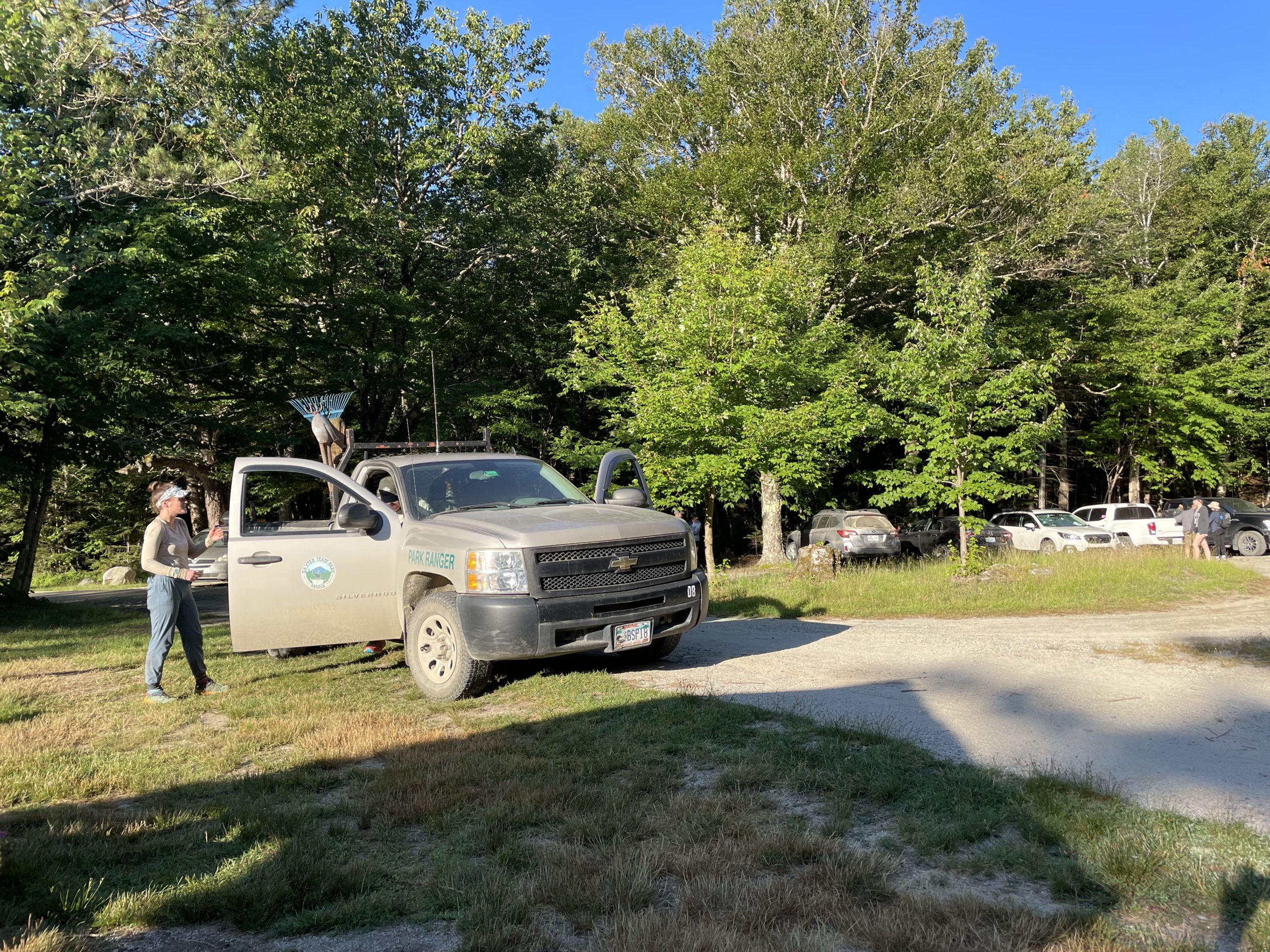 The next step was to connect with the ranger. He wasn’t in the office until 7:00 a.m., so we caught him coming in a big pickup truck from the state park. He began filling out our paperwork, pausing to jot down the day’s weather report from his crackling walkie-talkie (“The background noise isn’t helping!” he barked as we chatted on the front lawn. proximity). I let the others go first, then it was my turn. I’m officially NOBO number 181 to climb Katahdin – and my number at Amicalola was 1269. That’s a lot of people being left behind. 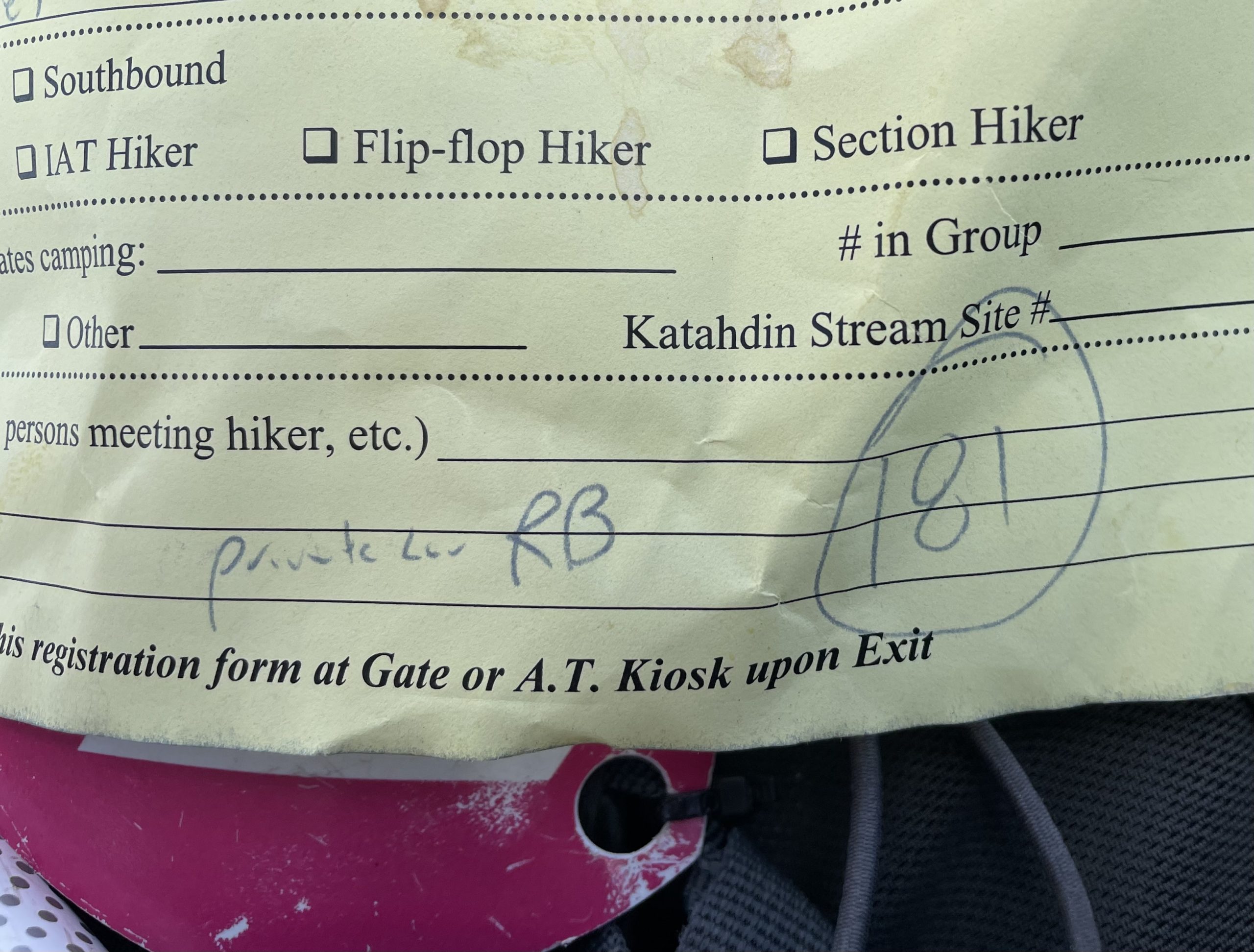 The start of the ascent was an emotional moment. I had been here before when I was little and recognized little things along the trail – the water crossing the path, the rush at Katahdin creek. Here I am, 25 years later, following the same path again, at the end of a four and a half month odyssey through the mountains. The morning was clear and the pink granite blocks shone brightly in the sun. 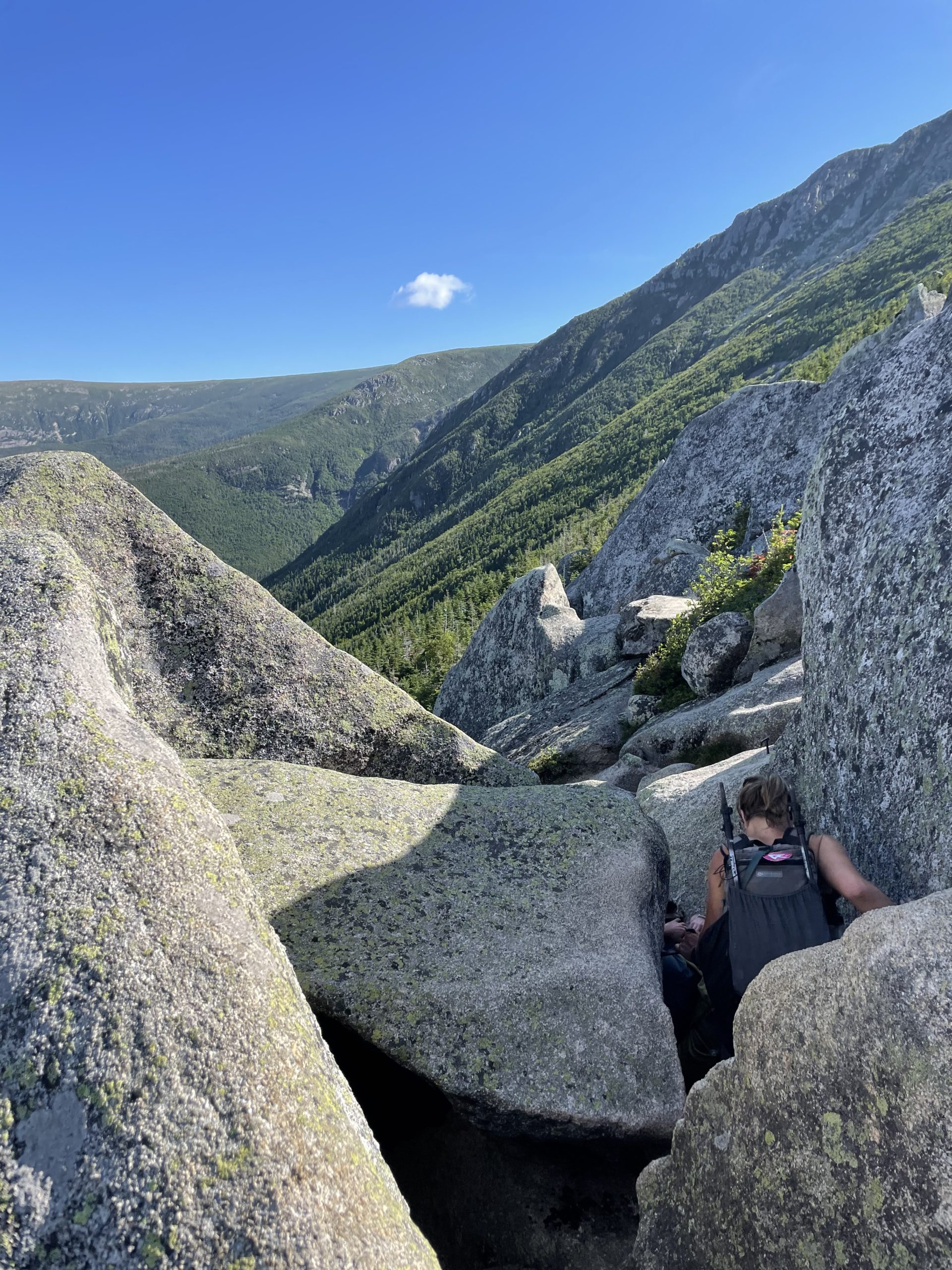 The first two miles were easy, then the rocks started. The Hunt Spur was every bit as incredible and terrible as I remembered, combining the climbing of the Mahoosuc notch with the steepness of the Wildcats. The walls of the valley stood out on either side of these enormous terraced rocks. Our small group scattered along the way, as we climbed our way above the tree line.

Finally, we reached the “gate”, where the alpine meadow begins. It is unlike any other alpine area in the north, a landscape of rolling peaks that feels like its own treeless world. I could have imagined myself in the tundra of Labrador or Nunavut, except for the drop off the edge of the plateau to the forests and lakes far below. At the Whites the ridges are steep so you can see the line of trees going up to the bald peak. In Katahdin, the mountaintop is its own sovereign slice of the farthest north. 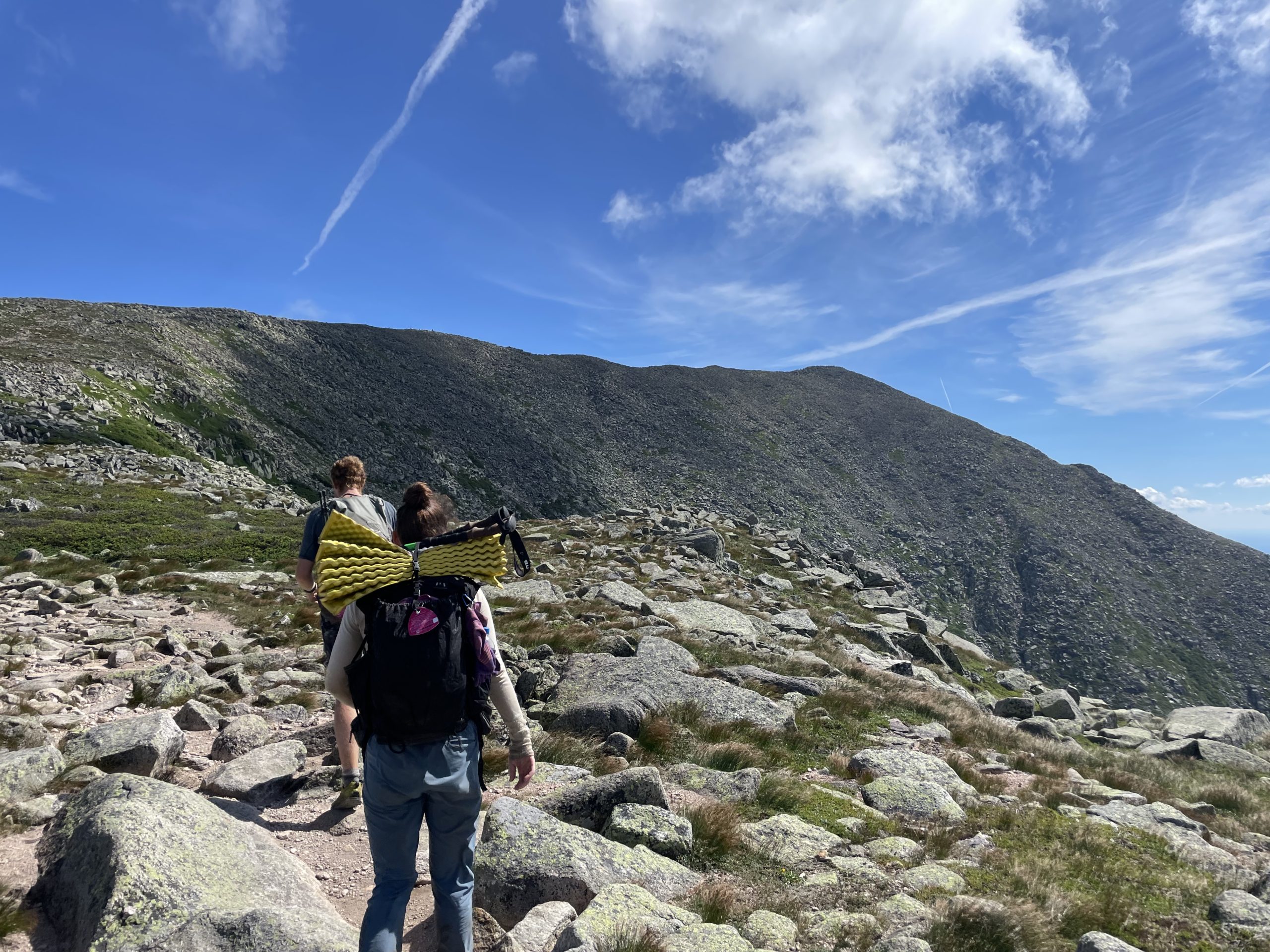 It was strange walking through this alpine world knowing that the endless trail had its end in sight, at the top of the next hill. Soon we were only a mile away – the very last mile of the AT. The summit sign, at first small and distant, grows larger and larger. We hiked back up knowing it was the last incline we would hike as Appalachian Trail hikers. 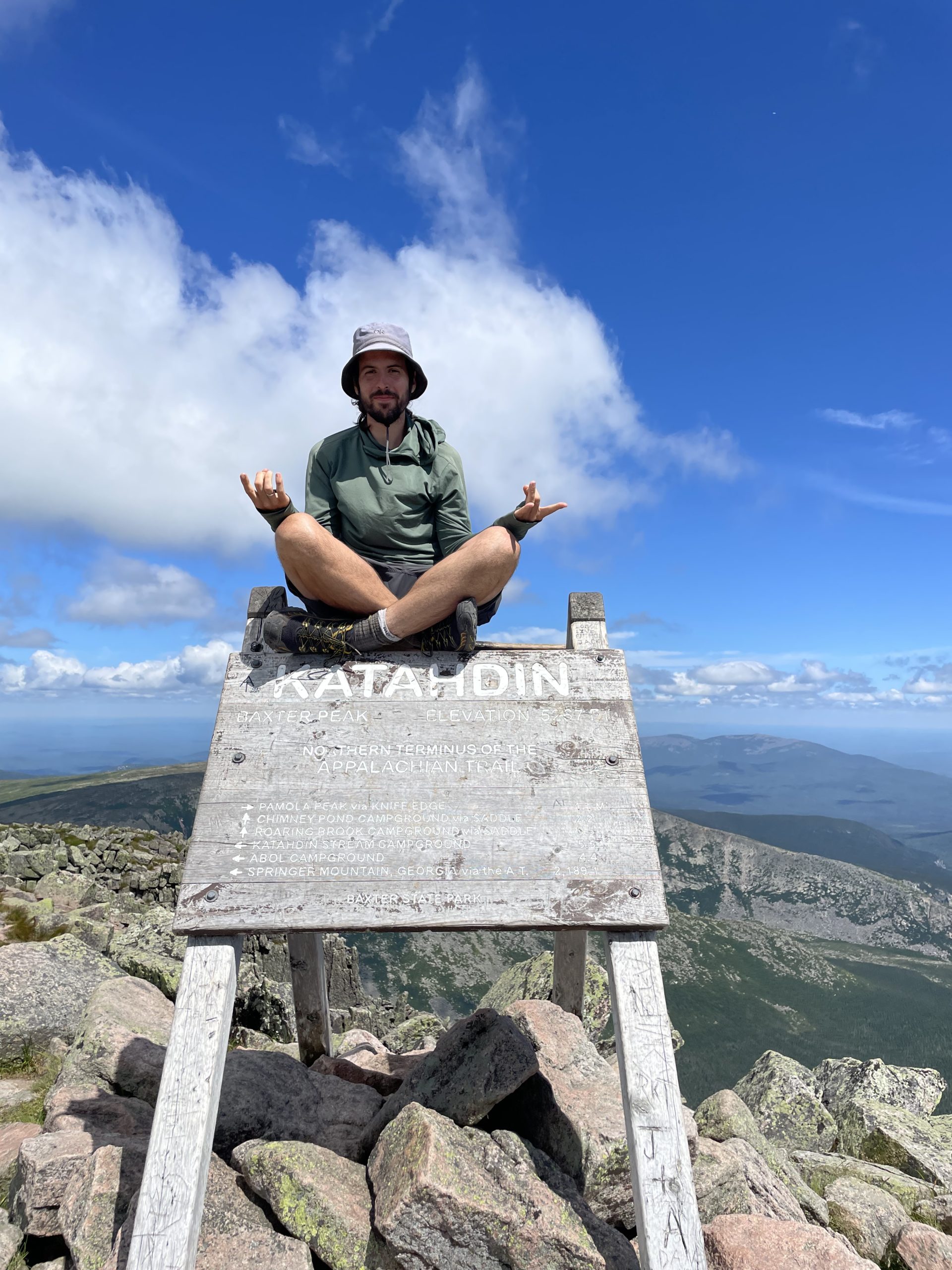 Then we were there. The crude wooden sign reading “Katahdin”, the large pile of boulders reaching up to a mile high. And the vast expanse of the cathedral circus behind it all, dropping thousands of feet down a huge curved wall. People were jostling to take pictures.

It was a long half hour we spent up there. We took lots of photos with the sign, striking a new pose whenever there was a break in the flow of day hikers. It was around 11:00 am when we reached the top I think, although I wasn’t paying much attention to the time. We sat down and ate snacks and said goodbye. 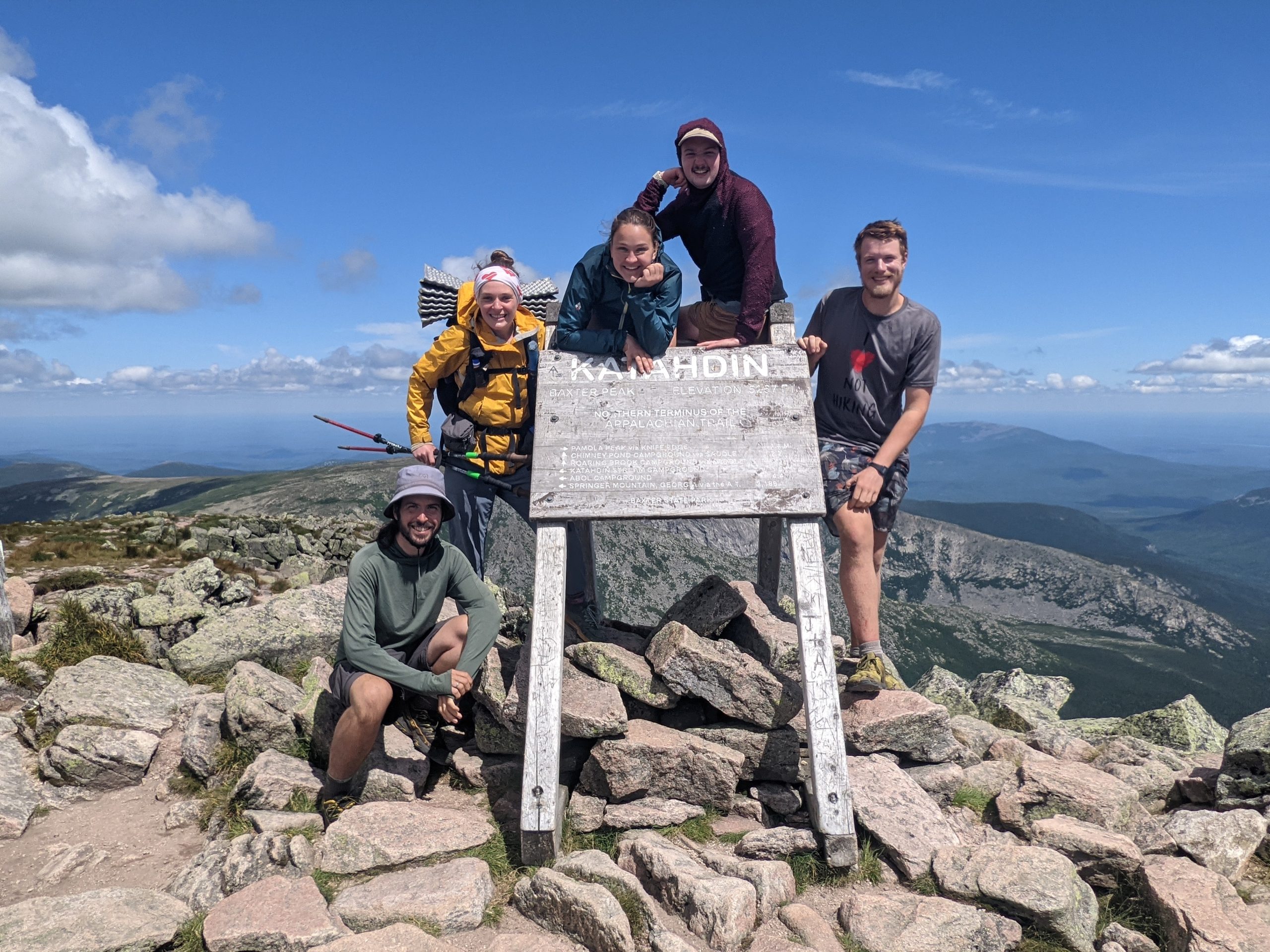 The others were going down a different way – on Abol Slide – but I was going down to Roaring Brook along Knife Edge. I could see it stretching east, a jagged rocky ridge between the peaks. South Peak was less crowded than the true peak, although so close to the same height that we had mistaken it for the peak on the way up.

Once Goodall and the others were gone, I was quietly alone again. The blue flames as I meandered through the rocks reminded me that the AT was exhausted. There were no more. I was on a side trail. It was a strange empty but peaceful feeling, like I was floating in the sky between the gulfs on either side, dancing with the cliffs in front of the few other hikers heading that way. 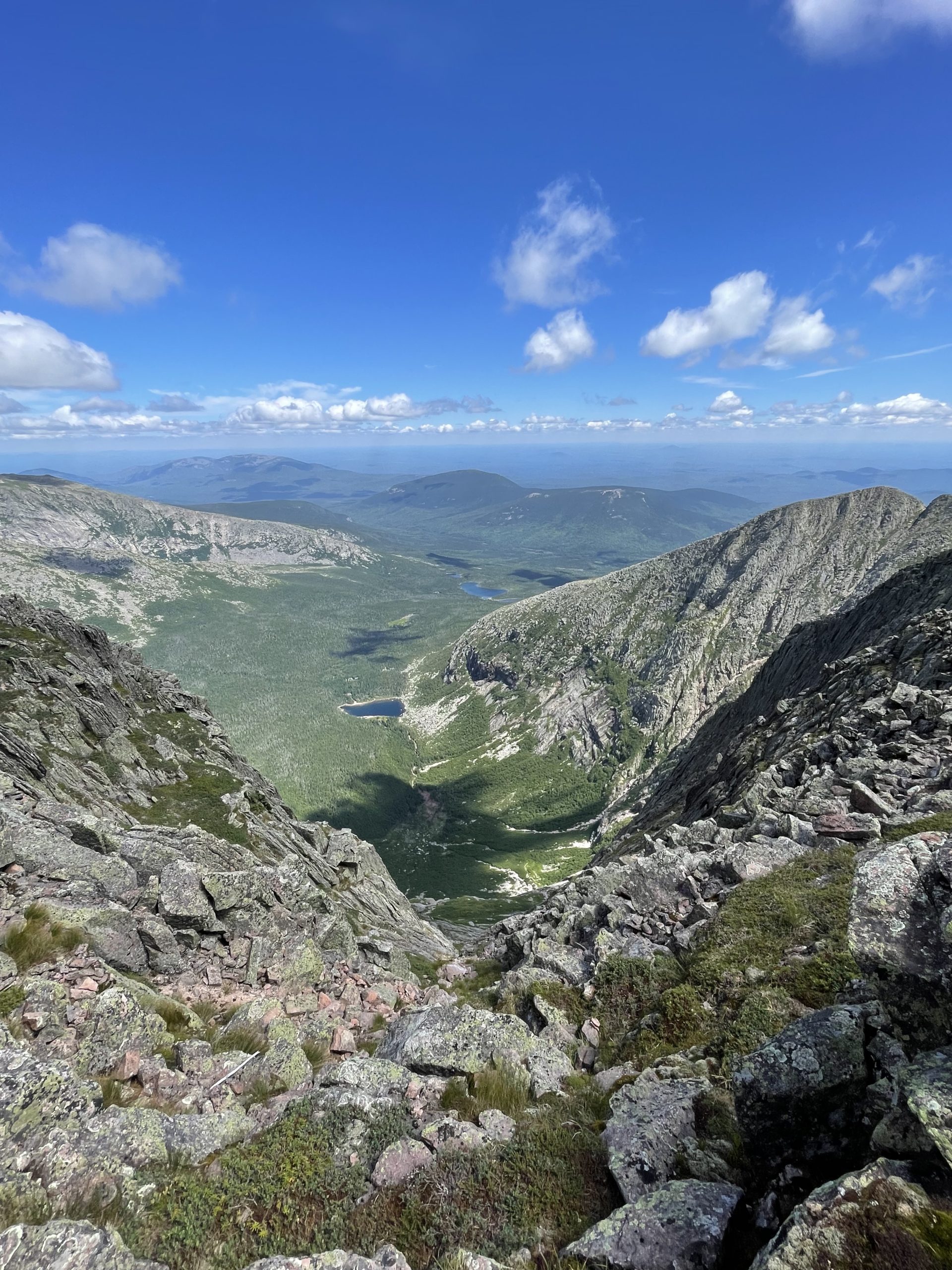 At the south summit, I climbed a few meters up the valley wall facing Chimney Pond and sat meditating for a long time. I said my weekly prayer for the last time on the trail, thanking the water, the earth and the trees for helping me along my way. I thought of how Katahdin, like Kittatinny and Catoctin, means the Great Mountain, the great one, which rises far above the earth. Mountains have an enduring presence like nowhere else – perhaps that’s why we are drawn to them. Or maybe it’s something else. I wasn’t trying to think too much at the time, I just figured it all out. 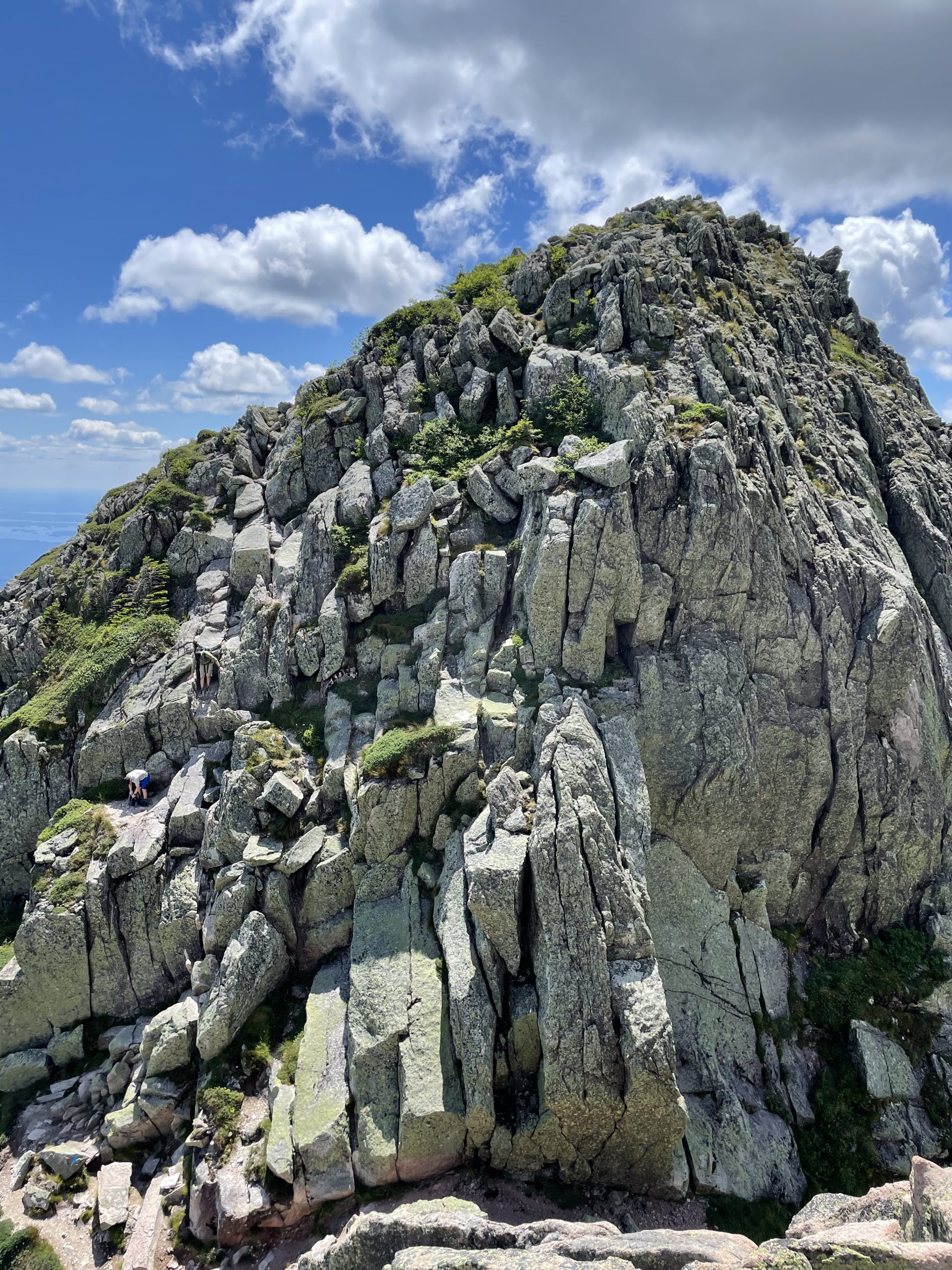 At some point I got up and left, continuing my dance along the cliffs. I passed many day hikers who seemed scared of the trail, struggling to find a way along the rock faces. I felt myself slowly but inexorably descending from this place among the clouds, the plain of the lakes getting closer and closer on each side. Climbing one steep rock wall and up another, I wonder how they got away with calling it a “trail”. I reached an alpine knob called Pamola and realized I could see the tree line far below. I continued on what looked like an airway over the green, watery plain, to a resting place with a huge chair-shaped boulder, then through bogs and stunted trees along the way. a ridge line dotted with rocks. 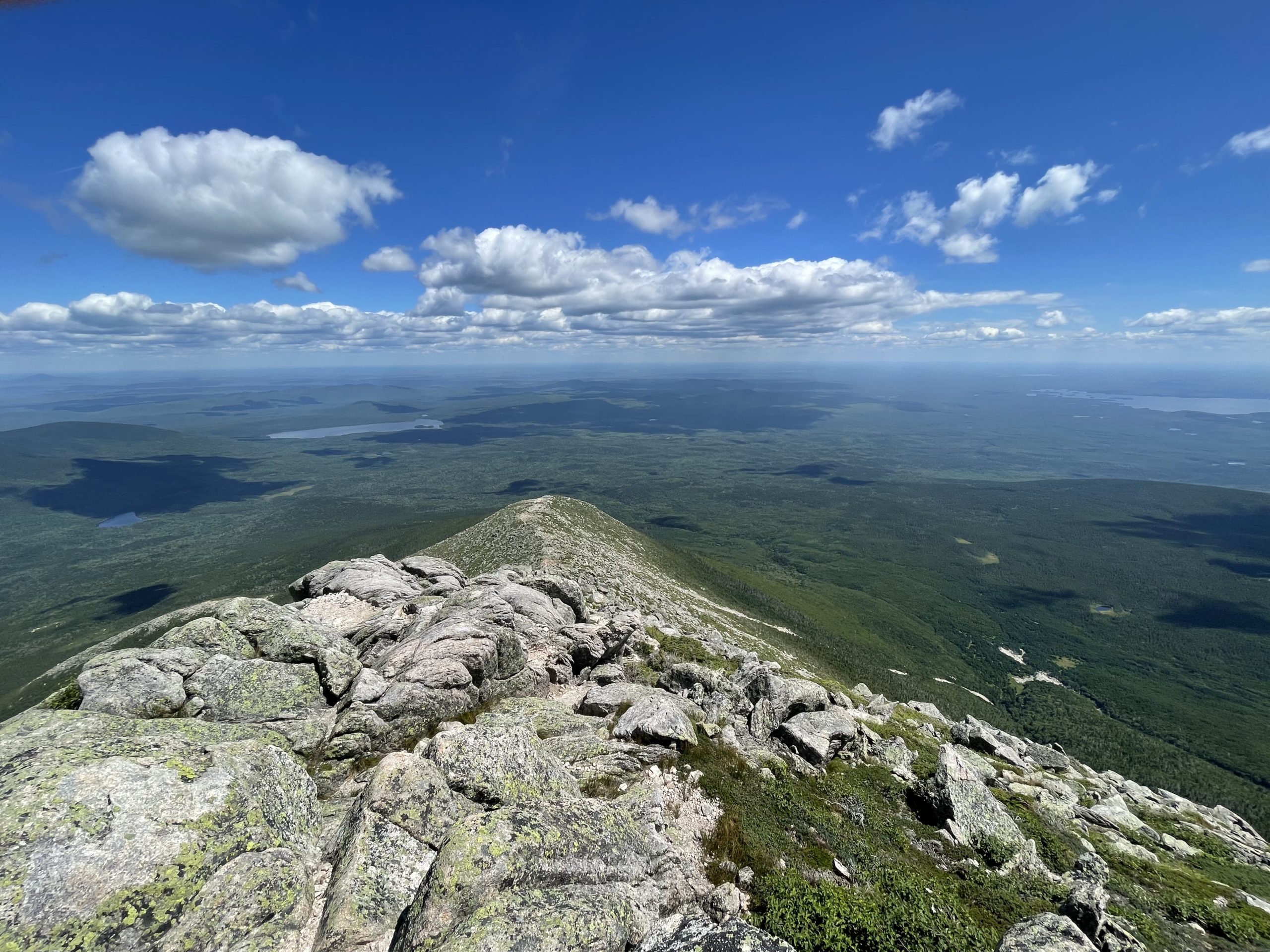 Sometime in the middle of the afternoon, hours into my descent, I heard the sound of rushing water and realized it was Roaring Brook. The trail ended and I took a path along the creek. Before I knew it, I was in a campground, then a parking lot. I met Andrea at a swimming spot along the creek and ducked into the freezing water just long enough to cool off. Then off we went, heading back to Abol Brook for one last night in Maine. 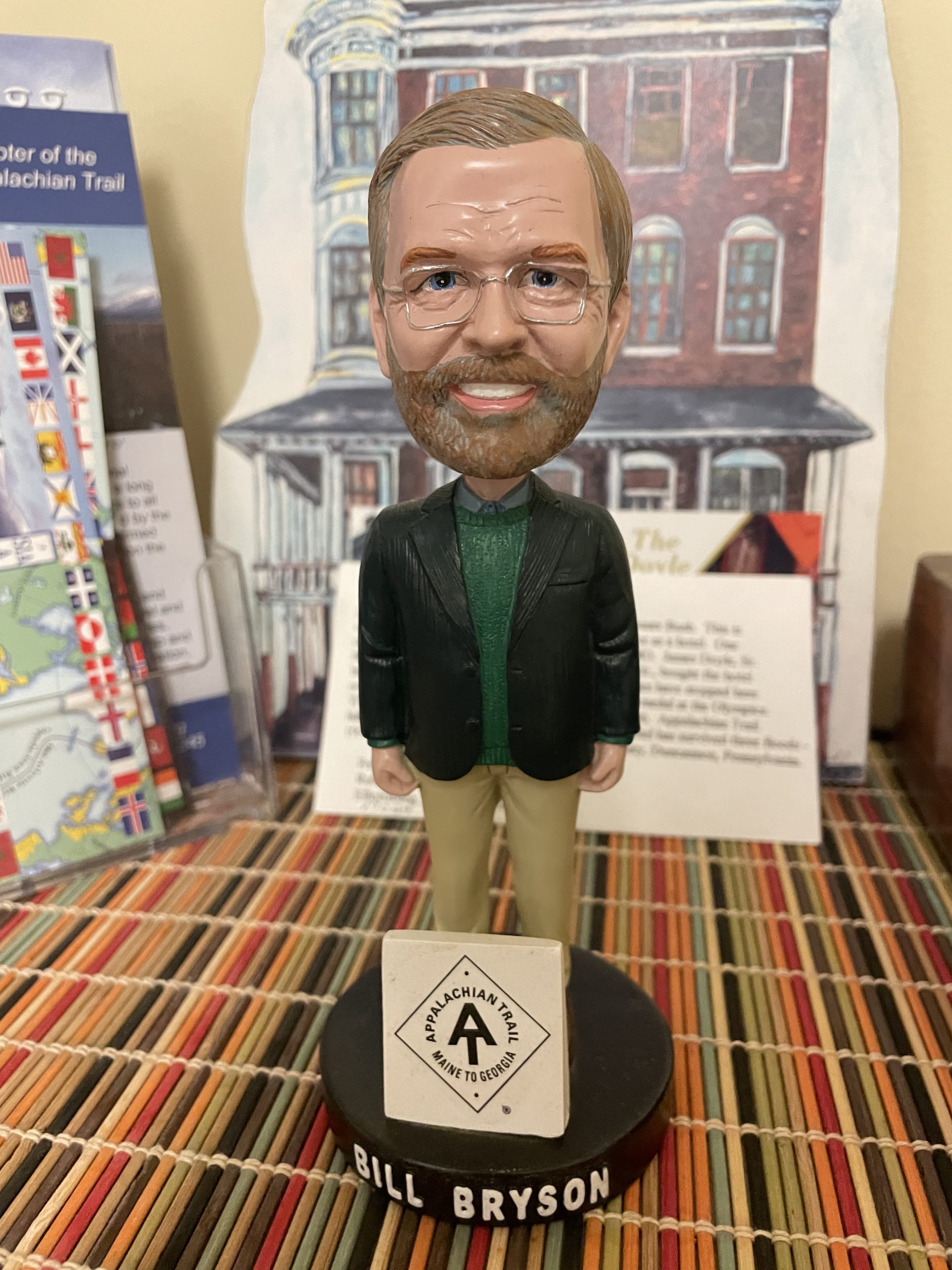 The next day I met my friends for breakfast at the AT Cafe in Millinocket. We had our fill of eggs, pancakes and potatoes, and talked about the trail and what we were doing next. I finally met Goodall’s partner and introduced my wife to Pantless and the others (she had already briefly met Goodall on the Long Trail). We dropped into the AT Lodge and signed a ceiling tile for posterity. So we were all on our way, scattered to the four winds.

Since then, there has been a lot of driving. The first night we stopped at Lowell, where I wanted to see the old cotton mills and boarding houses that mark America’s first industrialization. This place has changed the world in more ways than we know. Then we drove through Massachusetts to Mount Frissell, where I summited Connecticut just to say I made it. In New York, we decided to try some trail magic and handed out coffee and donuts to every hiker we could find. Finally, we made our way to Maryland. 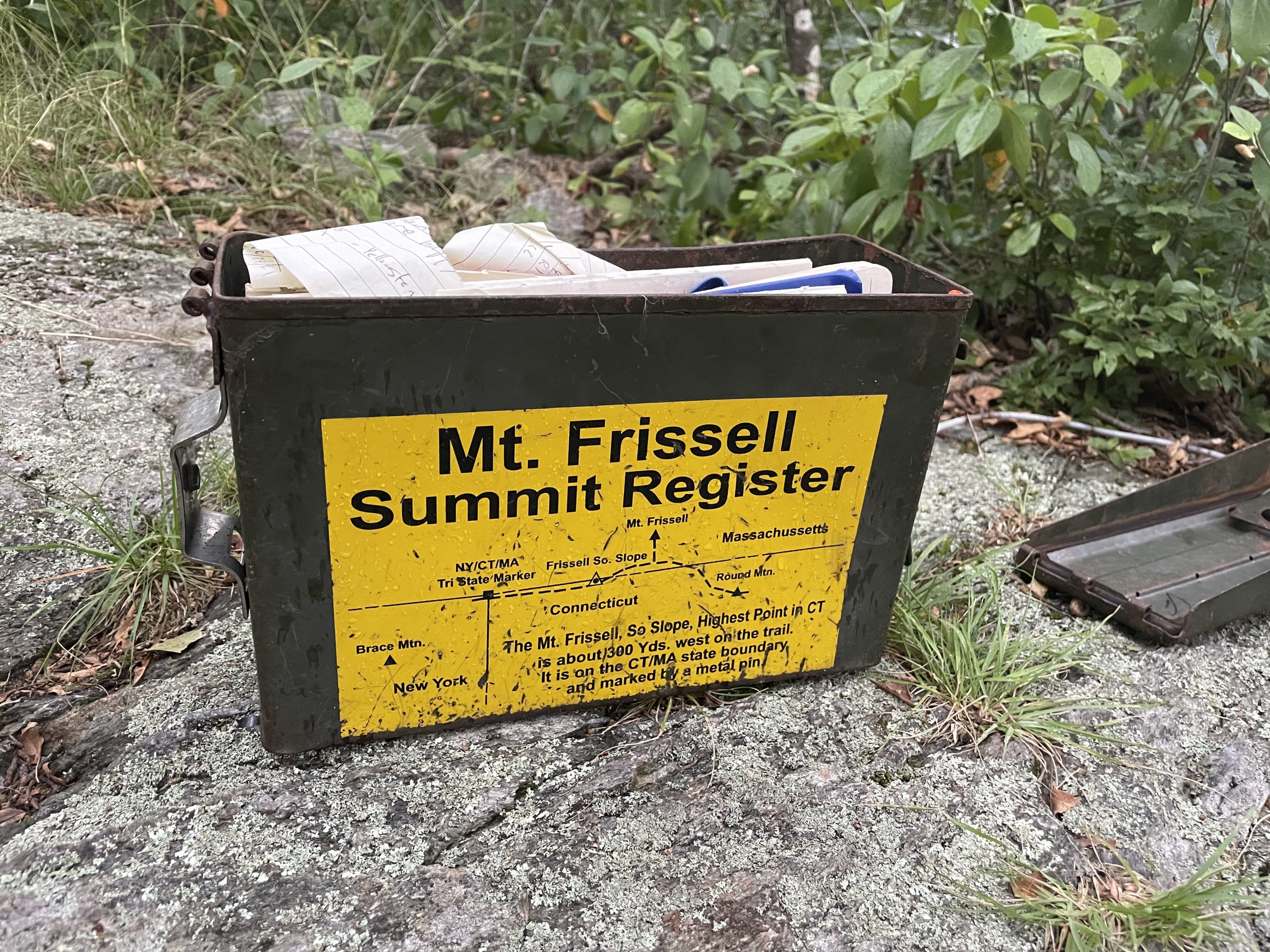 The next two days were a blur of packing boxes, as we moved our things from my in-laws’ house to a shipping crate bound for Washington State. This is where we are heading in a few weeks, to try to start a new life on the west coast. I already have a job there, but not much else. As I lifted our vacuum in the U-Haul warehouse, I wished I was back on the trail. It felt like home. 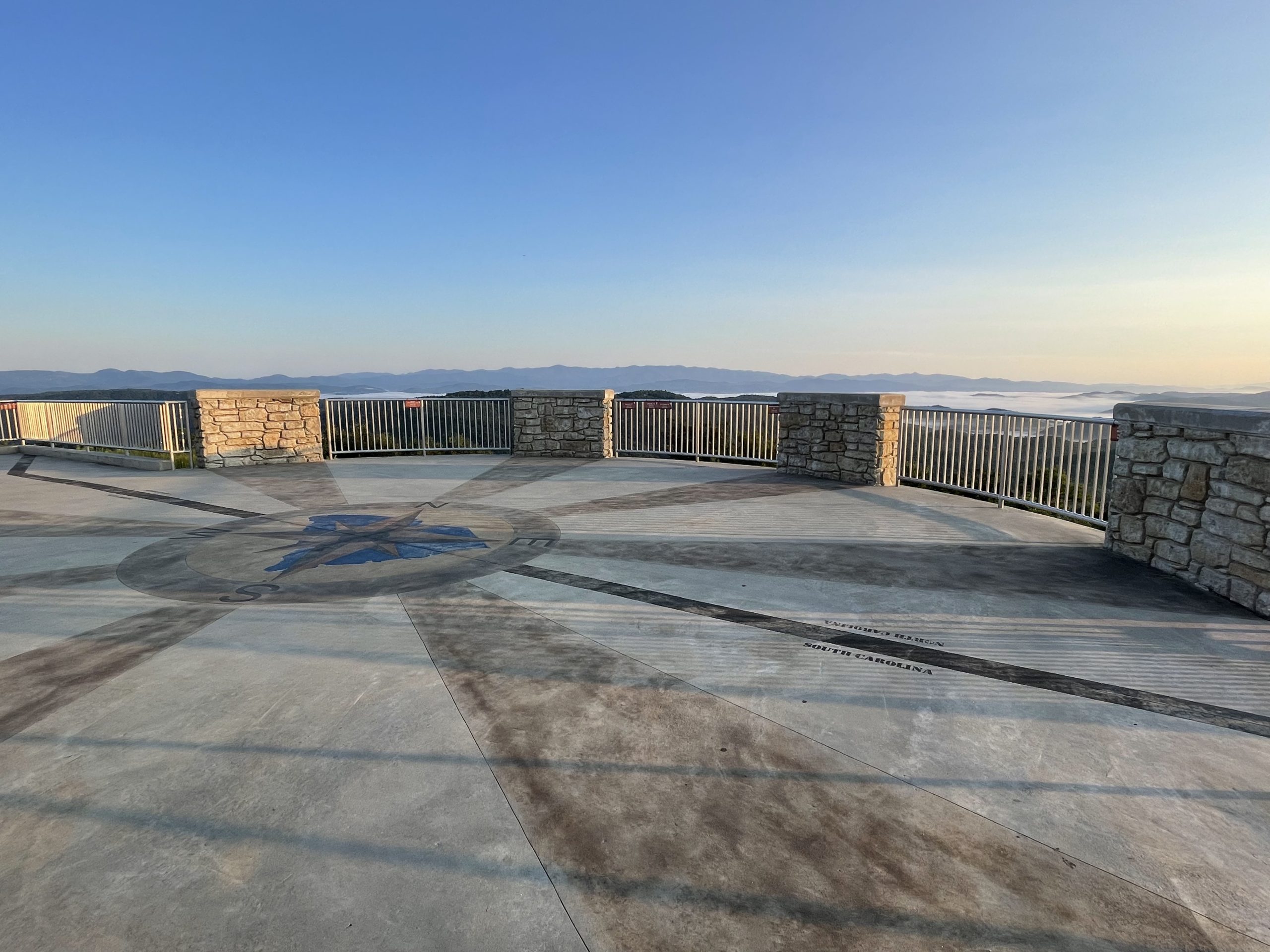 More driving after that, through Virginia and North Carolina to the South Carolina foothills of the Blue Ridge. I was back where I started. Then further south, stopping at Okefenokee Swamp before ending the day at a Florida beach campsite. Now I’m at my parents’ house near Miami, where iguanas climb palm trees and bananas grow easier than tomatoes. 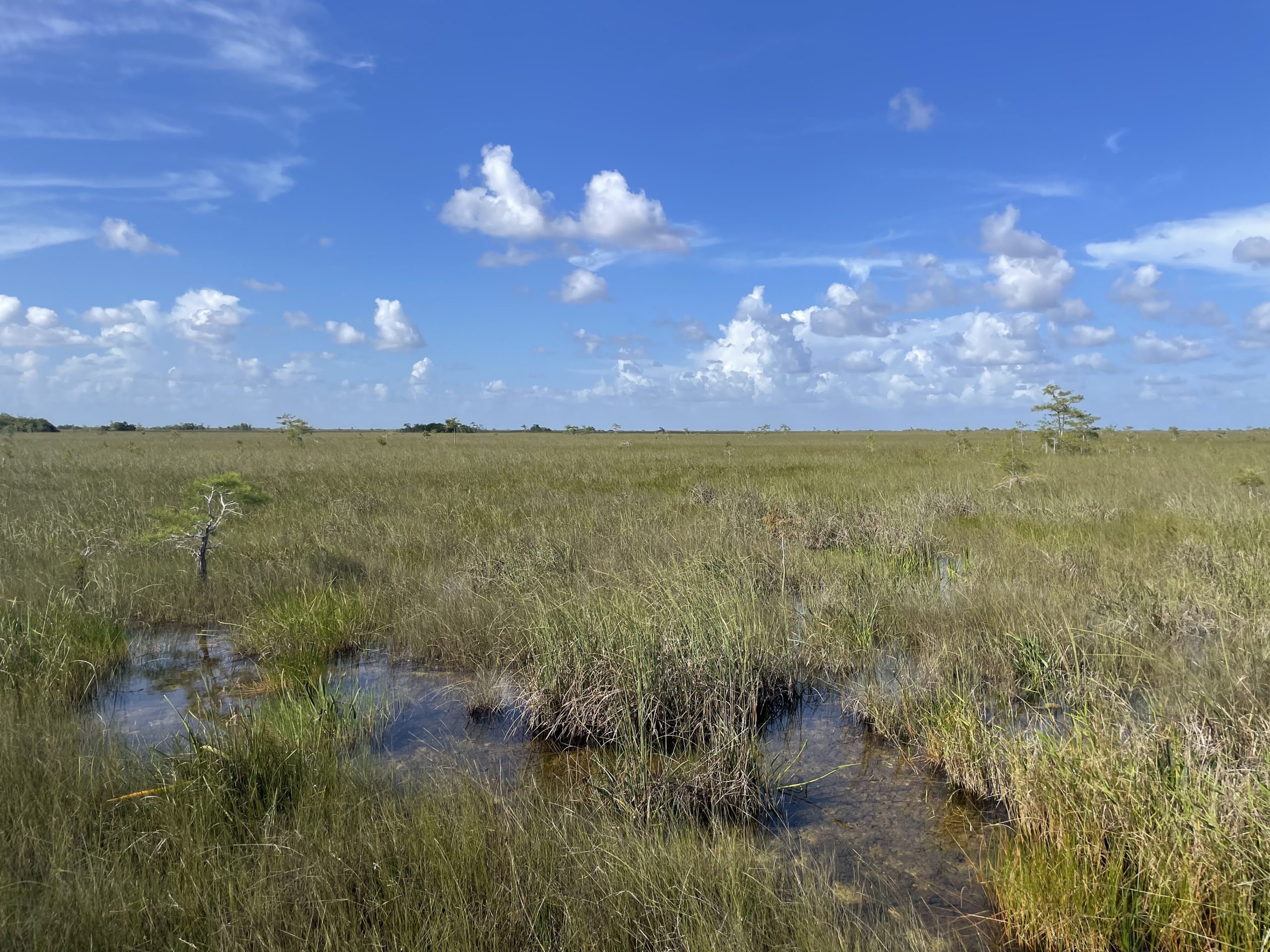 Back in the Everglades.

In about a week, we’ll start along the Gulf Coast and across the desert southwest to California, then along the Pacific to the northwest. It will be another journey for me, but more prosaic. It will be filled with freeways, streetlights and gas stations, sights of things I knew I had to see and stops at places I knew I had to be. I’m not going to live with the landscape, travel through it with the rhythm of the seasons, learn the names and faces of the forest. 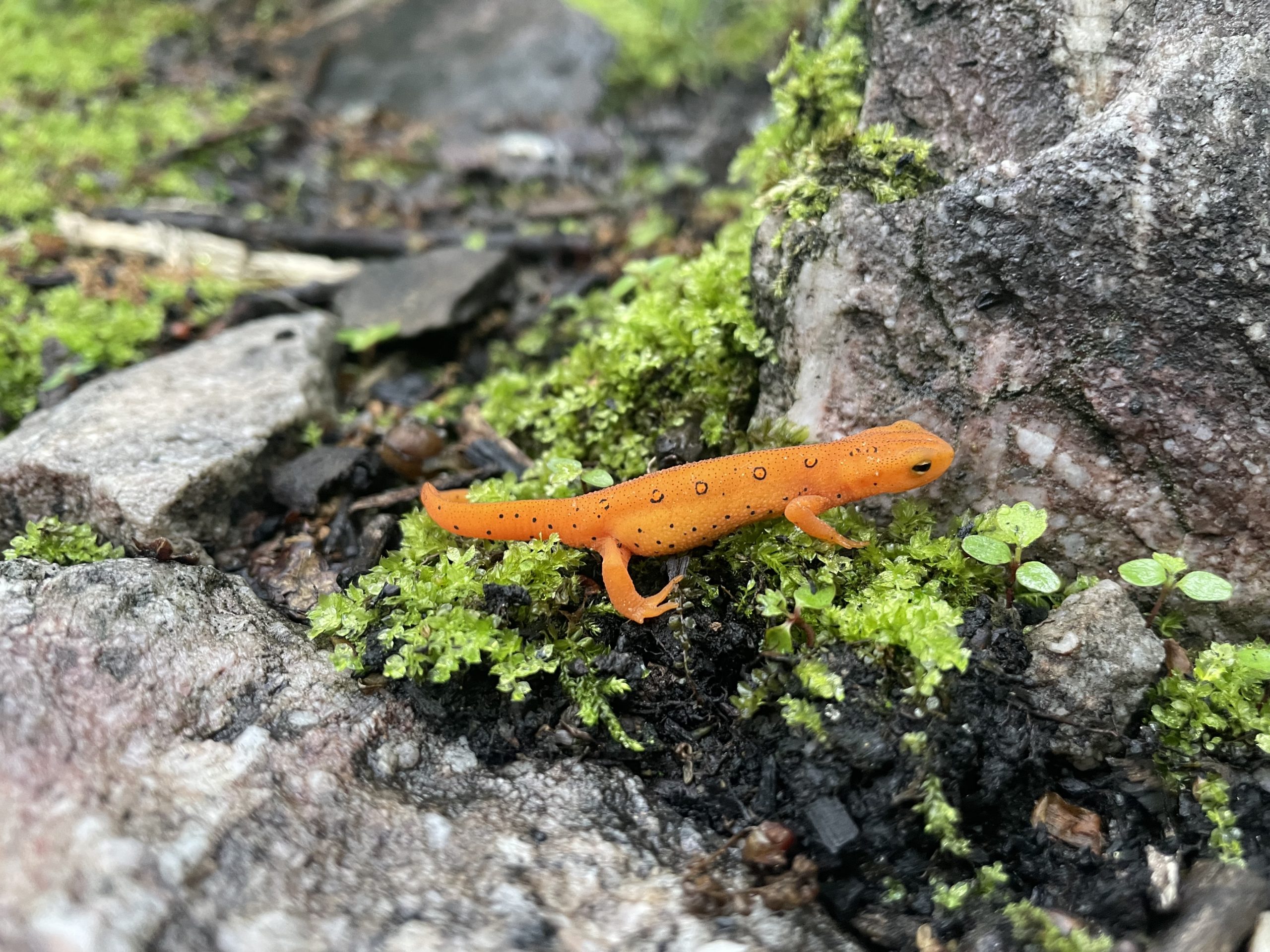 Because, of course, that’s the beauty of the Appalachian Trail. You can blend in with nature on a trip like this, knowing that you’re joined by hundreds of people who share your path, moving slowly but steadily north. You see the best in people and truly understand that there is more to life than this mechanized, bureaucratic world we have built around ourselves. The forest lives, and the mountains live, and so do we.

I am immensely grateful that I was able to undertake this journey and complete it so safely and smoothly at my own pace. It will take me a while before I can fully digest the lessons of the trail – for now I am re-adapting to artificial lights, indoor air, beds and staying seated. In the meantime, I’ll thank Katahdin for being there, the big mountain at the end of the trail, and all the many peaks and valleys along the way. 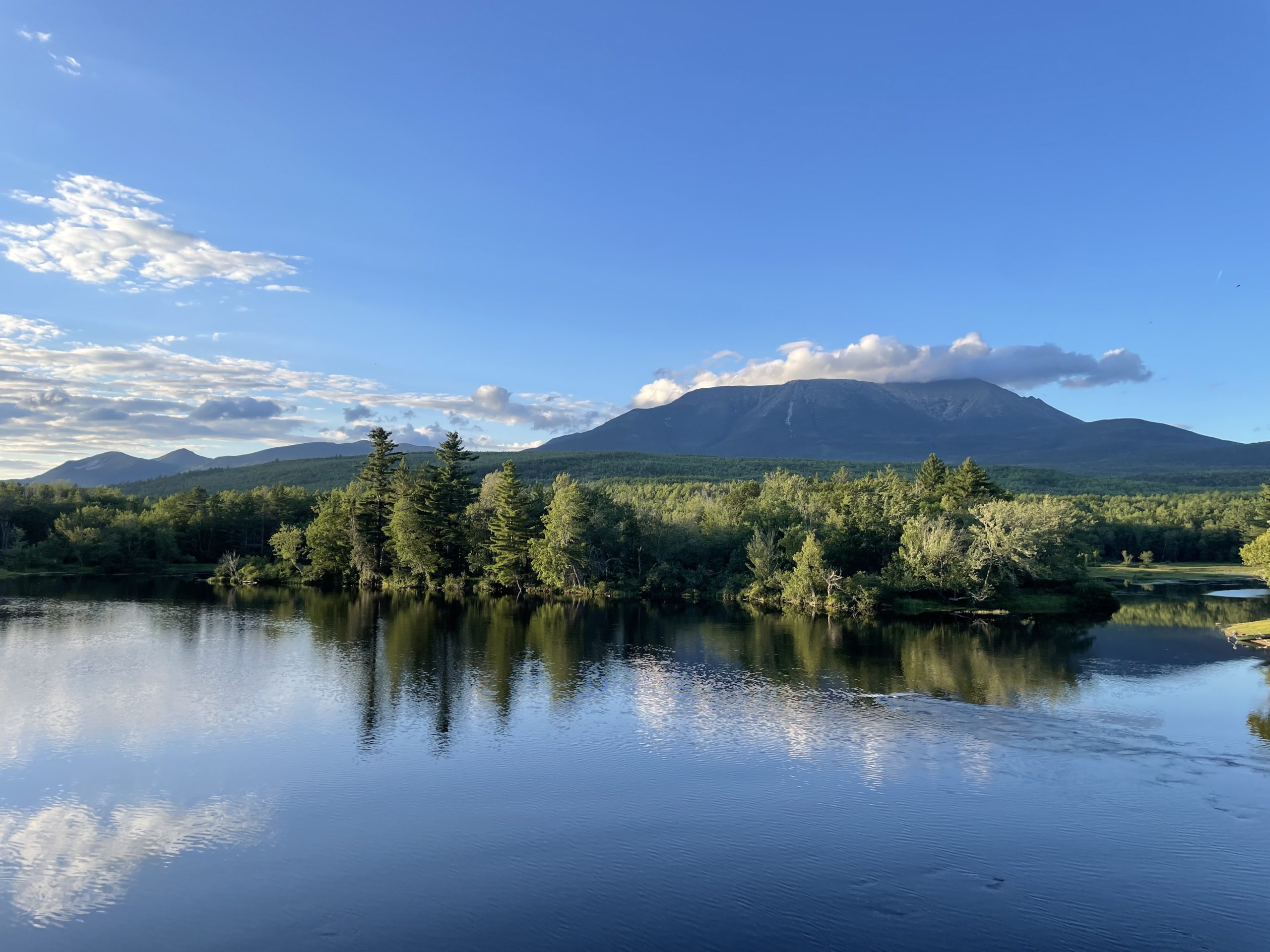