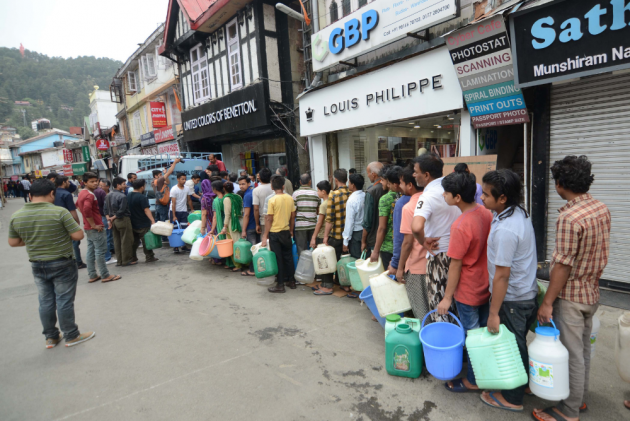 India’s favorite hill station continues to be under threat

Despite adequate water levels in all of Himachal Pradesh’s major rivers – Sutlej, Beas, Ravi, Yamuna, Chandra-Baga (Chenab in J&K) and countless streams and perennial streams from melting glaciers, the state capital, Shimla, continues to be threatened by water insecurity.

Many in this city have yet to forget the 2018 water crisis when disturbing images of residents scrambling for hours for a bucket of water went viral, a crisis some environmentalists have compared to that of the Cap. Water availability at the time had fallen to 18-19 MLD against the daily requirement of 38-40 MLD, which left the city dry for almost eight days.

Almost three years after the crisis, conditions have shown more minor improvements. Measures taken by the Himachal Pradesh government, including the establishment of Shimla Jal Prabandhan Nigam (SJPN) Ltd, solved part of the crisis by plugging leaks and wastage by replacing old British-era pipes and increasing the availability of water from different sources.

After losing two summer tourist seasons due to the Covid-19 lockdown, water issues appear to be under control for now. There are no street protests, no overflowing tanks, no portable water tankers deployed to supply water to areas affected by scarcity and, of course, hoteliers are no longer sending out “Don’t.” not come to Shimla ”to tourists as in 2018. Instead, many in the city now boast of having an adequate water supply.

“It is incredible but true that the Shimla water crisis is a thing of the past. Whether in high season or during the lean season, the town benefits from a supply of 42 to 44 MLD, sufficient to meet daily needs without water rationing. We also have the ability to take more water now if demand increases, ”said Dharmendra Gill, Managing Director of SJPN Ltd.

In fact, he claims, Shimla is moving towards a 24/7 water supply and smooth operation of the system has already been achieved in some parts of the city.

However, not all are satisfied with the city’s current water supply.

Citizens like Sanjay Chauhan, former mayor of Shimla, question the distribution system which he says continues to be in shambles.

“There is no shortage of water, the availability has gone from 37-38 MLD to 44-45 MLD. Yet many areas of Shimla, including mine, only receive water every other day. It is simply a water management problem that continues to give Shimla a bad reputation, ”says Chauhan.

Despite the improvement in the water supply, water scarcity remains a relevant issue for Shimla, an issue which is likely to become a hindrance for tourists visiting in the future.

A survey by WAPCOS, a government agency, in 2017-18 found that 47% of the city’s water pumped from six different sources is wasted in the distribution network and also in the supply line. Leaks in the water pipes that make up the main supply line were one of the main causes of water loss. The main supply line, which was laid in 1924 by the British, has now been completely replaced, adding at least 3 MLD of water to the supply system.

In 2018-2019, Shimla Municipal Corporation had the old pipeline between Craigneno and Dhalli replaced after an investment of Rs 8 crore. A new system, Koti-Brandi, has also been put into operation with the aim of adding 5 additional MLDs of water. The British-era Gumma water supply – the city’s most reliable system, has been completely overhauled. It provides 21 MLD of water to the municipality.

Even after plugging the leaks, the residual water flowing into 45 sector water storage tanks was going to be wasted in the distribution network. This has been verified to a large extent.

Shimla historian Raaja Bhasin traces the history of Shimla’s water to the 1870s, when Shimla was heavily dependent on the irregular supply of water from a dozen and a half baolis and springs. All of these springs were scattered throughout the city and while some are perennial, others could dry up when they were needed most.

“The Combermere stream, now completely obscured by construction activities, was a somewhat more reliable source at the start. Most of the townspeople drew water from it. Servants carrying goatskin sacks and ‘mashks’ tied to their backs would come and fill the water and bring it home, “he writes in one of his books on Shimla.

Former Congress mayor Narinder Kataria also remembers that the roads in Shimla, especially the mall road, were washed daily. There was enough water in the public taps. But as the population grew, the city’s civic infrastructure was strained and there was a shortage of clean water. The increased influx of tourists further aggravated the situation, which reached its climax in 2018.

Since the establishment of SJPN Ltd, however, the availability of water has increased dramatically. Nevertheless, the distribution network, quite old and woven of millions of small and large pipelines, is still unreliable. An interruption in the electricity supply, for example, can affect pumping and therefore disrupt the city-wide water supply program. These variables always pose a danger to the regular and continuous water supply.

Monsoons also pose serious problems to the city’s regular water supply. During monsoons, the streams flow with high turbidity due to the high slit load, causing water scarcity. So far, no suitable system has been put in place to deal with such eventualities.

Environmental issues and climate change also have an impact on water availability. Most water sources are exploited as perennial rivers and are very vulnerable to climate change. Less snowfall, little or no precipitation can lead to water depletion.

“Climate-related risks will inevitably have an impact on Shimla’s water availability in times to come. Natural water sources depend heavily on snow and rain. It is high time to focus on long term solutions. However, the next World Bank-funded (Rs 1813 cr) project for Shimla to extract water from the Sutlej River is progressing at a snail’s pace, ”said Vishal Gulati, an environmentalist who was part of the Framework Convention. United Nations on Climate Change, Glasgow. Outlook.

Former mayor Sanjay Chauhan also sharply criticized the delay in the implementation of the WB’s water supply project, which, he recalls, was lifted in 2014-15. The cost of the project was then only Rs 900 crore, but it is now Rs 1813 crore. That says a lot about the government’s lack of seriousness towards Shimla’s water problems, Chauhan said.

The Shimla resident attributes the city’s water insecurity to poor water governance, lack of urban planning, poor tourism management during peak season and climate change. He further admits that there is a lack of long-term strategies for water sustainability in urban centers.

Principal Secretary (Urban Development) Rajneesh, who participated in WB negotiations on the Sutlej water project, says the project was a breakthrough nonetheless. Once completed, the project will help provide 24/7 water to the areas of “Greater Shimla” as well as to the peripheral belt areas through a robust distribution system.