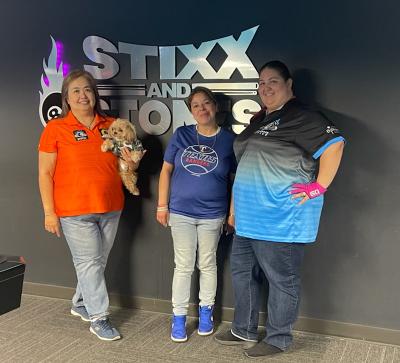 Since the pandemic landed on our collective heads two or three years ago and curtailed many competitive activities, there has been a slow but steady return of players, who either stopped playing altogether or lack of site opportunities and availability of personal equipment. , brought their game home. In addition to this return, there has also been an emergence from players who, for one reason or another, have never been heard from before (or at least, very little) and who currently do not only come to the tables, but win events. for the first time.

Example(s) in point: Jennifer Hooten of Garland, TX, who prior to last weekend (Saturday, April 9) had only cashed in once at a regional tour event, finishing 13and on a mixed DFW 9-Ball Tour stop two years ago; a finish that made her the best female finisher of the event. She also won the 2019 Texas State BCA Women’s Fair Match Singles event in 2019, which was not recorded by us here at AZBilliards. She came on the losing side at this most recent event to record her best result on the tour, winning her first regional tour title on the $500 Cuetec DFW 9-Ball Ladies Tour which drew 21 Stixx entrants and Stones Billiards in Lewisville, Texas.

Nancy Rios of Dallas entered the event without any cash payments on record and qualified for the first time. As a result, his first recorded cash payout anywhere was the accolade of being an event runner-up. However one might gauge the nature of the 21-person competition, anyone who has ever shown up at a pool table with money in play will tell you: you never forget your first win and/or or your first cash payment and the benefit of increased confidence in your efforts will pay off the next time you come to the table.

Hooten opened their winning campaign with a double win over Judy Frank and followed it up with a 4-1 win over Julie Stephenson, who was running 6, and recorded cash payouts on the Hunter Tour, OB Cues Ladies Tour and now the DFW tour for over 20 years. Hooten stepped forward to face Ginger Abadilla in one of the winners’ semi-finals. Rios started with a win over co-tour manager Monica Anderson 3-1 (Anderson running at 4), and beat Deliza Baumbach, double hill to Krystle Suarez in the other winners’ semifinal.

With Suarez in the race at 7, Rios qualified for the game on the hot seat with a 3-6 double win over Suarez. Abadilla joined her after dispatching Hooten to the losing side 3-1. In a straight 3-way race, Rios won their first hot seat 3-1.

On the losing side, Hooten picked up Baumbach, who followed their winners’ quarter-final loss to Rios with wins over Ileana Sullivan 3-2 (Sullivan in the race at 5) and Melissa Smith 3-1. Suarez drew Jennifer Pavlovick, who had lost her opener to Smith and was in the midst of a five-game winning streak that included knocking out double-springer Julie Stephenson and Tina Soto 5-2.

Pavlovic picked up his fifth victory over defeat, beating Suarez 5-4 (Suarez running at 7). Hooten joined her in the quarterfinals with a shutout against Baumbach. Hooten ended Pavlovic’s run in those quarterfinals 4-3 (Pavlovick running 5) and turned to a rematch against Abadilla in the semis.

Hooten allowed Abadilla just one rack in the semifinals and moved on to what was the first (recorded) finals match for her and her opponent. Hooten would need to win twice, and worthy of a match, no doubt characterized by the mutual anticipation and eagerness, not to mention anxiety, of the two contestants to claim their first regional tour title, the first set was doubled. With Rios at 3, Hooten won it 4-2. With emotions going in two separate directions (trust and concern), Hooten racked up all the supports in the second set and won the title.

“Both of these ladies benefited from the tour’s mission,” noted tour co-director Monica Anderson, “designed to provide a fun, challenging and rewarding tournament environment for low, mid and high level players.”

“Our hot seat match (between Rios and Abadilla),” she added, “was a battle of two level 3 players, who got there by taking advantage of missed opportunities by their higher level opponents.”

Anderson (along with co-tour directors Hooten and Abadilla) thanked the owners and staff of Stixx and Stones Billiards, as well as title sponsor Cuetec, Fort Worth Billiards Superstore and Kamui. The next stop on the Cuetec DFW 9-Ball Ladies Tour, scheduled for July 9, will be hosted by Rusty’s in Arlington, TX.