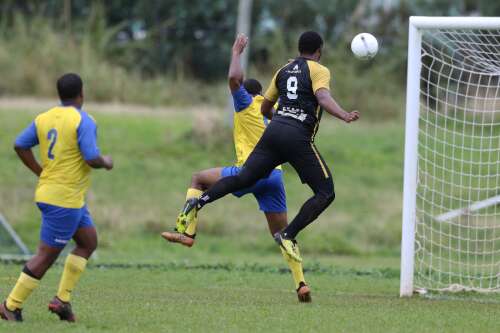 Robin Hood moved five points clear of the relegation zone with a comprehensive win at White Hill Field that was led by two goals from striker Chae Brangman.

Hood also edged the Devonshire Colts on goal difference, by a margin of three goals.

The visitors got off to the best possible start, scoring twice in the opening eight minutes.

Dante Leverock, their player-coach, was pleased with the three points, but not entirely satisfied with the performance against the bottom side, who were exhausted and had no substitutes on the bench.

“I don’t think we played well, but we got the three points, which is the most important thing,” admitted Leverock.

Excuse me: Jaylon Bather passes two Somerset Eagles players as he helped his side Robin Hood beat his former side 4-1 at White Hill Field yesterday (Photograph by Lawrence Trott)

“These are the games we have to win and we have to play them again. We want to look forward and we believe we can score points against the best teams in the league.

Brangman opened the scoring with a shot from the left side of the penalty area, and Hood was on course for a first win since winning over X-Roads on December 5, when Liam Evans doubled the lead five minutes later. A ball into the box from the right side by Brangman was twisted by Shannon Burchall for Evans to head home at the near post.

Shakir Smith, a Hood player last season before his transfer to the Eagles, cut the arrears in the fourteenth minute when he scored directly from a corner on the right.

Joshua Roberts, the young Eagles goaltender, who was also a Hood player last season, kept the scoreline tight midway through the first half with a couple of back-to-back crucial saves as Hood kept the pressure on.

The Eagles suffered a first-half injury to Keedai Astwood who sat out briefly to recover from a groin injury. He was forced to continue playing despite the injury due to the team’s difficult situation.

Brangman made another effort over the crossbar from close range after former Eagles player Jaylon Bather set him up with a good pass after entering the penalty area from the right side and performing a pass with his weaker right foot.

Brangman had a few more chances in the final two minutes of the first half, the first a shot on the corner, which prompted a good reflex save from Roberts. Then, just at half-time, a ball into the box from Burchall on the left saw Brangman rise high to power a header past the keeper from eight yards.

Leverock headed over the bar for a corner to Evans’ left early in the second half as Hood continued to waste chances. Then Aaron Nelson sent the ball back into the box where Burchall lifted his effort over the top.

Hood scored a fourth goal three minutes later when a cross from the left by Daniel Cook, one of the teenagers Hood pushed this season, found Nelson at the far post to score.

Leading comfortably, Hood was able to make a double substitution in the 69th minute as the youngsters replaced the experienced, Tajai Goater and Niyan Outerbridge replacing the experienced forward pair of Burchall and Nelson.

Bather almost capped it all off with a goal against his former side, after bursting into the box in the 86th minute before firing a right-footed shot wide past the far post.

“The Warwick Archers Under-15s and Under-17s, which are our youth teams, just won and most of those guys played last night so thanks to them,” Leverock said, referring to the Appleby Youth final which took place on Saturday evening. despite the heavy rains.

“They grow from senior experience. Since I first saw them, massive jumps!