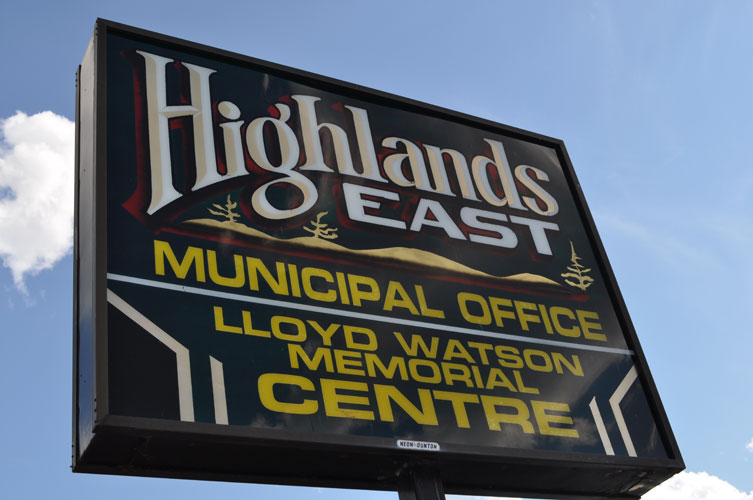 JBriefs from a meeting of council for the Municipality of Highlands East are provided below.

The Municipality of Highlands East voted against lot creation for the subdivision and plan for a condominium on the east side of Center Lake at a recent meeting, which is contrary to Haliburton County, which declared this plan complete and has scheduled a public meeting for April 27. Previously, Highlands East Council had undertaken a public consultation initiative regarding the proposed disposition of the 200 foot Crown Reserve on Center Lake and, following this consultation, advised the Ministry of Natural Resources and Forests by resolution that council did not support the provision of the 200′ reserve to facilitate the creation of waterfront lots.
“With no waterfront property, plus the issue that the unopened road right-of-way is required to access this property, I fail to see how council is able to approve it at the future at the next public meeting,” said planner Chris Jones
There was an opportunity for comments or questions, but none of the members took advantage of it. Council then accepted the resolution not to approve the creation of lots on the east side of Center Lake where they do not abut the shore. Mayor Dave Burton called for a recorded vote. Only Deputy Mayor Cec Ryall voted against the resolution.

The Municipal Integrity Commissioner presents his annual report
Harold Elston, the Highlands East Integrity Commissioner, presented his annual report to council and gave an education-focused presentation, The Structure and Principles of Effective Municipal Government, which clarified the rules governing, which included pecuniary interest and conflicts of interest. The Code of Conduct, Roles and Responsibilities and Social Media Rules were also included in the presentation. Elston’s annual report showed there had been no reports of code of conduct issues or requests for advice since his last report.

Council receives draft climate change adaptation plan
Highlands East Council received the draft Climate Adaptation Plan presented at the March 8 meeting by Haliburton County Climate Change Coordinator Korey McKay.
McKay said this adaptation plan is the second in a three-phase planning process. The council previously accepted the corporate mitigation plan in fall 2020. The community plan will be the final part of the process.
McKay explained that the Climate Adaptation Plan is the first step to understanding climate-related risks that impact the operation and services of the municipality and provides steps to build the resilience of operations, assets and services. municipal infrastructure.
With climate projections anticipating an increase in average temperatures, when there will be more days with over 30 degrees Celsius, temperatures, less snow, more cold weather and an increase in average precipitation, McKay said the risk is equal to the probability multiplied by the consequences.

The adaptation plan has four main objectives: The first is to ensure that current and future infrastructures are adapted to withstand the impacts of a changing climate. The second is to protect municipal natural assets and enhance nature-based solutions. The third is to minimize health risks to outdoor personnel and provide resources to the community to improve their adaptive capacity and the end goal is to integrate climate adaptation into municipal plans and processes. McKay has highlighted 28 actions to achieve these goals.
During the implementation and monitoring of the plan, McKay explained that priority will be given to actions that fit into existing work plans and require modest operational changes. Comprehensive project implementation plans will include more resources and staff time. There will also be annual progress reports and a five-year review of the plan.
The Board received the delegation and draft plan without comment. The plan will be up to Haliburton County.
Year-to-date construction values ​​are on the rise
Executive Director/Treasurer Shannon Hunter, reported on behalf of an absentee Laurie Devolin, CBO and By-Law Enforcement Officer, who was in training, construction values ​​to date are $2,258,800 compared to 1 $821,660 for the same period in 2021. Devolin had asked Hunter to advise the board that there are currently many other outstanding claims.
Deputy Mayor Cec Ryall noted that the number of applications to date is actually lower than this time last year, but construction values ​​are much higher. He asked if it was because people were building much bigger houses. Hunter explained that it was.
Claims department disputes tracking
Highlands East By-Law Enforcement Officer Wayne Galloway said one of the biggest challenges for the department right now is keeping track of all the properties because people are turning them over so quickly.
“Some things go back to 2018. Can we do anything to shut them down?” Deputy Mayor Ryall asked. Galloway said many of the oldest cases are before the courts and are taking time to resolve.

Fire department expands ice water training
Highlands East will soon be able to conduct its own ice water training, Fire Chief Chris Baughman reported. On February 26 and 27, four other people received ice water training. Four others have followed them in training, so that they will be ready to deliver the program in the future.
“Did you say we are able to train our own people,” asked Mayor Burton. Baughman said he hopes they will after the April exam.
“Will we need any additional equipment,” Deputy Mayor Ryall asked. Baughman said the Paudash Lake Association raised money for the gear and they would have enough, including another full set of gear and five outfits for the firefighters.

No offers received yet
Property supervisor Jim Alden told the council that no bids had been received for the Cardiff changing room project after issuing a call on February 10. The bidding process is expected to close on March 11.

Burton credits efforts to public works
During Operations Supervisor Brett Charboneau’s report to council, Mayor Burton expressed his gratitude for the work done by public works staff during the recent ice storm.
“I would ask you to pass on to the mayor and council operators that we are extremely pleased with how they got us through the ice storm and kept us safe,” he said.
Charboneau said, “It’s been a busy month with the snow and keeping the facilities that are now open clean.”
It looks like they still have enough sand for the rest of the winter, with part of a dome and a small dome full of sand. Charboneau reports that there were no incidents during the bad weather the previous week, thanks to “the operators and the good equipment”.

HE moves forward with household hazardous waste agreement
There will be plenty of opportunities for Highlands residents to get rid of household hazardous waste this year now that all four municipalities in Haliburton County (Highlands East, Dysart et al, Minden Hills and Algonquin Highlands) will be accepting waste from one of these municipalities on the Household Hazardous Waste Days, totaling 14 days across the county.
“It’s great that we’re doing this. For public awareness, will we post the days at transfer stations and dumps?” asked Deputy Mayor Ryall. Charboneau said they can post notices at these locations and that there will also be notices in local newspapers.
“Has Faraday Township been notified,” Mayor Burton asked. Hunter explained that IL still has the relationship with Faraday during the HHW days, so they will do both. “There will be specific days with Faraday that will be separate from the days with the other four municipalities,” she said.

Council approves use of reserve funds
Economic Development Coordinator Joanne Vanier’s request to council for $1,000 from reserves has been approved by council to hire a graphic designer to develop graphics for a composting education campaign this year. Vanier explained that copyright issues for current graphics mean they have to create their own in the future.

The board appoints the delegation of power
Hunter explained the situations in which a “lame duck” period can occur during the last year of a board’s term. If, during the nominations, there are not four existing board members who plan to return, or 75%, the board may be in a lame duck position. According to the Ontario Municipalities Act, council is required to appoint a delegation of authority to the chief administrative officer in the event that this occurs. The Board received the report and approved the delegation of authority to CEO Shannon Hunter.