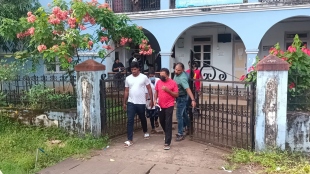 The owner of Goa’s Hill Top Night Club, John Stephen D’Souza (Steve), who is believed to have been involved in the Hyderabad narcotics case, was brought to Hyderabad from Goa early Friday morning. This news was confirmed to the Herald by Hyderabad Police Commissioner CV Anand. Sources claim that he is currently being interrogated by Hyderabad Police’s Hyderabad Narcotics Enforcement Wing (H-NEW) narco crack squad. Steve will then be handed over to police at Osmania Police Station shortly, where his formal arrest will be presented on Saturday. He will also be brought before the local court for remand. Steve’s name came up during the interrogation of suspected Goa-based drug peddler Pritesh Narayan Borkar by H-NEW and Osmania University Police Station where he was picked up in Hyderabad with ecstasy. Pills, LSD Blots and MDMA at Kakatiya Nagar, Habsiguda under PS limits of Osmania University, Hyderabad. According to H-New’s investigative report, Steve was one of the people from whom Borkar and his accomplice Manzoor Ahmed recovered bulk drugs.
Meanwhile, Goa Police will file a bail waiver request for Edwin Nunes who ran Curlies Restaurant, in the Sonali Phogat murder case. Nunes, police say, breached bail conditions by making himself unavailable, as he is also named in Hyderabad’s NDPS case with Steve, but failed to cooperate with narco-cops from Hyderabad who want to arrest him. Vikas Naik @ Vicky, Ramesh Chowhan, Edwin Nunis and Sanja Gowekar sold the drugs to Pritesh Borkar and Manzoor Ahmed from Goa, according to H-NEW detectives.