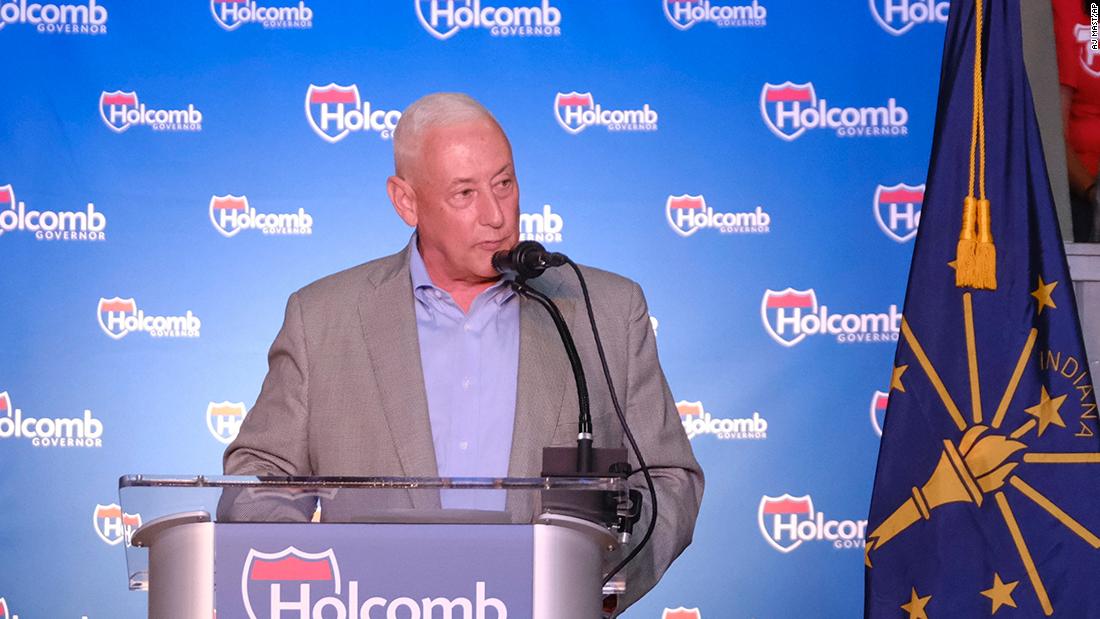 It was late December 2020, and Greg Pence had just received his Covid shot on Capitol Hill and was sitting in the observation room when Republican Rep. Tom Cole of Oklahoma walked up to talk about his younger brother.

“I said, ‘Hey, just tell Mike when you talk to him, I look up to him,'” Cole told CNN of his conversation with Greg Pence, a Republican from Indiana.

The congressman replied, “Well, you don’t have to worry about Mike. He’s going to do the right thing,” according to Cole. “And he’s definitely not going to overturn an election.”

A year later, the fury of the fringe element has only grown for the former vice president, but he’s not the only one in the crosshairs. Standing next to him is his brother, a two-term conservative lawmaker and newcomer to the political scene. Greg Pence is walking a fine line as he tries to carve his own path in a GOP still dominated by Trump — and also to get re-elected at a time when it’s kind of tough for a Pence. Two candidates have shown up to challenge him in the state’s May primary, but neither is considered a serious contender.

So far, Greg Pence’s path falls solidly into the category of loyalty to his brother, despite the fact that he personally opposed the certification of the Pennsylvania election results on January 6, 2021. He nevertheless maintains that then-Vice President Pence had no power to overturn the election.

“I support my brother and I will always stand by my brother,” Pence told CNN. “I was with him on January 6.”

In fact, it’s literally true. He was with the then vice president in a secure room as the violence on Capitol Hill unfolded and their lives were in danger — a situation the congressman called “surreal.”

“If you’ve ever been in a combat situation or a life-threatening situation, it all happens very quickly and it’s surreal. I think my brother is a hero for him to say ‘I’m not leaving'” , added Pence, who rarely spoke about his experience that day.

Yet even as Pence compares the experience to a combat situation, he refrained from reacting to the Republican National Committee’s characterization of the day as “legitimate political discourse,” which has forced Republicans to keep rehashing events of the day and Trump’s role in promoting conspiracies. and the lies of a stolen election.

“I’ll let you all keep talking about it,” Pence said. “I’m going to talk about my brother and the job he did in taking us over. This is my story, okay? If other people want to interpret it differently, I saw a hero that day . I saw a leader that day. And so I said, “I’m always going to stand behind him. In fact, it’s hard to say your younger brother is your hero, but he’s my hero.”

When Greg Pence walks down the hall, he looks surprisingly like his younger brother, often forcing reporters to do double takes until they realize it’s not the former vice president but the member. of the Indiana Republican Congress marching towards them. It would have been used as a decoy to shake up the press as his brother was set to be named Trump’s running mate. Yet since arriving in Congress, Pence has managed to spend most of his time under the radar, nurturing relationships with members of competing factions within his party, staying away from the party’s most high-profile skirmishes. and gaining a reputation for being more of a “workhorse than a show horse.”
But with the Republican Party still at odds over how to characterize the violent events of January 6 and in light of the former vice president’s latest stunning rebuke that Trump was wrong to insist that he could have unilaterally overturned the election, Greg Pence’s days of relative anonymity could be missed – especially if his brother decides to run for president in 2024, which potentially means challenging Trump for the party’s nomination.
Not to mention, the former vice president remains a prime target for the House Select Committee investigating Jan. 6 as it focuses on its investigation. But even though Pence remains a private intermediary with the former vice president and continues to defend him publicly, he doesn’t want to speak on his brother’s behalf either.

“I’ll leave that to him,” Pence told CNN, when asked if his brother should voluntarily appear before the committee. “Our father always said, ‘Climb your own mountain.’ So we are all very different, we don’t tell each other what to do.

‘More of a workaholic’: How Pence operates behind the scenes

Pence, 65, a former Navy officer and small business owner of antique malls, decided to enter the political arena in 2017, after Trump was already in the White House. The Columbus, Indiana native fills the solidly red seat that Mike Pence held for more than a decade.

Even though Pence’s name remains at the center of the conversation Republicans have about their party’s direction, lawmakers on Capitol Hill say the Pence sitting in Congress never uses his last name for leverage.

“It’s actually the opposite, which is very refreshing,” said Representative Mike Johnson of Louisiana, a member of the GOP leadership. “Because almost anyone else would use that. Right? But he doesn’t. And he almost works against it. Because he’s his own man.”

“He doesn’t go out of his way to glorify himself or get noticed,” added moderate Republican Rep. Dusty Johnson of South Dakota. “He’s more of a workhorse than a show horse.”

He said that when Pence talks about his brother, “it’s not forced. It’s not like he loses his name.”

Moderate GOP representative Don Bacon of Nebraska also characterized Pence as a behind-the-scenes operator, telling CNN, “He’s not trying to get a lot of attention even though he can with his last name. “

Part of that sympathy comes from Pence’s ability to balance the vote with the faction of his party that remains loyal to Trump while also being loyal to his brother.

“He did his job that night,” the congressman said.

The Indiana lawmaker could certainly use his political standing and connections as a springboard for his political career, especially if Republicans win the House back next year. He is also a great fundraiser, especially for a grassroots member: He once deserved a shout out from Trump for his fundraising skills, with the former president joking, “I know a guy who looks like you.”

But while he followed in his brother’s footsteps by running for Congress, lawmakers are unsure if Pence intends to rise through the executive ranks or ever launch a bid for a higher job.

“You don’t talk to Greg Pence and think, ‘Oh, aspiration,'” Mike Johnson said. Yet at the same time, “people look at him and think this guy could be a leader.”

If he harbors big political ambitions, lawmakers say, he has kept them close to the waistcoat.

Pence sits on the House Energy and Commerce Committee, a senior panel that has broad jurisdiction over health care, the environment and telecommunications. He is also a member of the GOP Whip Team, which is responsible for counting votes and contesting membership.

But even though members were unsure whether Pence had leadership ambitions, members of the entire Republican conference spoke highly of his character.

“He’s one of those quiet forces inside the conference that people look to for common sense and stability in a crisis,” Cole said.

Even some of the hardliners in the conference, who criticized the former vice president and continue to falsely suggest he had the power to nullify the election, had nothing but nice things to say about Greg Penny.

“I find him very nice, very helpful and a very cheerful person, but we don’t sit on committees together and we haven’t worked closely on legislation,” said GOP Rep. Matt Gaetz of Florida, a fervent Trump. ally.

“He’s hard-working, level-headed, no-nonsense. A very good member,” added GOP Rep. Debbie Lesko of Arizona, who sits with him on the Energy and Commerce Committee.

Rep. Louie Gohmert of Texas, a member of the radical House Freedom Caucus, echoed a similar sentiment: “He’s such a nice guy you could never meet.”

Some lawmakers, however, didn’t have much to say about him, given his low profile.

GOP Rep. Jackie Walorski, also from Indiana, wasn’t sure how to describe the Pence brothers’ relationship.

“I have no idea,” Walorski told CNN, and added, in reference to the former vice president, “I’m not necessarily on anybody’s political team, so I don’t haven’t met him here.”

CORRECTION: This story has been updated to correctly identify that Rep. Jackie Walorski’s comments referred to Vice President Mike Pence and his relationship with his brother Greg Pence.