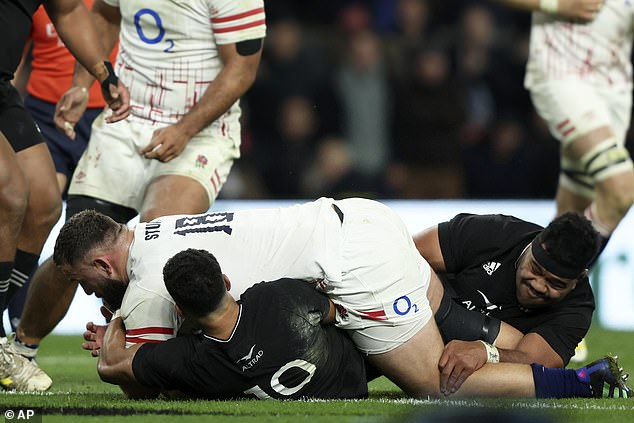 The Twickenham crowd were unsure whether to dance or cry. Should they join Manu Tuilagi in saluting Freed from Desire or hold their heads in their hands with Henry Slade? There were 71 minutes of frustration, nine minutes of elation and a final second of despair.

After one of the worst performances of Eddie Jones’ tenure, England pulled off one of the greatest comebacks in Twickenham history. Three tries in minutes changed the mood from a funeral to a festival, with Will Stuart becoming the unlikely hero.

The prop’s quick tries had the All Blacks on the ropes. New Zealand were down to 14 in the final game and England had a chance to make history, but Marcus Smith forced the ball away to settle for a draw. There was a chilling combination of boos and applause. No one quite knew what to think of it. 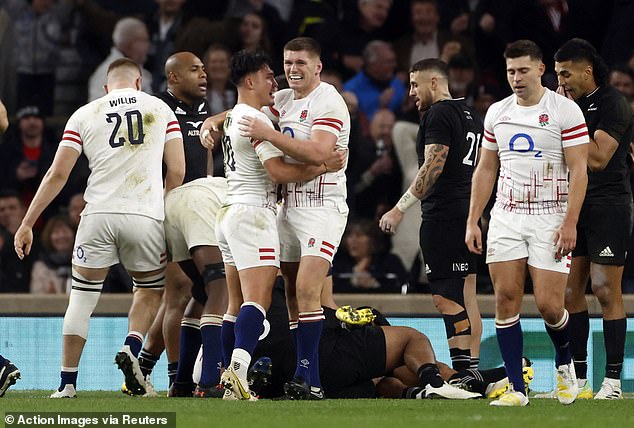 From England’s perspective, it was rugby’s equivalent to the Scrapheap Challenge. The first 70 minutes were nothing short of a car accident. They looked like a team that had been run over by the New Zealand team bus as they arrived, but they went on to carry out a remarkable rescue operation.

Why did they wait so long? Why did they only come out of their straitjacket when victory was out of reach? Closing exchanges, when Marcus Smith had venom coursing through his veins, were a model of what England can do when allowed to go wild.

Midway through the second half, frustrated corners of the crowd made jokes about Warren Gatland moving from the Amazon TV box to the England coaches box. They were cracking down on mistakes and poor discipline from when England conceded their first penalty after 40 seconds.

‘I will have it!’ shouted Ellis Genge, before flying off the line in an offside position to land a shot on Sam Whitelock. They had called it ‘big boy rugby’ and it was a baptism of fire for young scrum-half Jack van Poortvliet. His slow pass from the back of the lineup was intercepted by flanker Dalton Papali’i, who charged flawlessly to score a try giveaway. 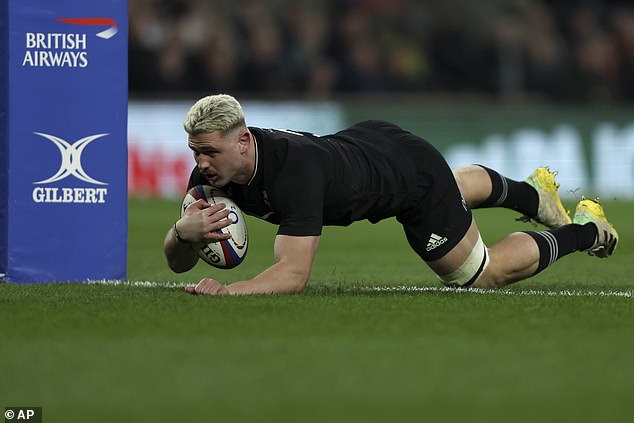 England stocks were crashing faster than the cryptocurrency. Lined up against Tyrel Lomax, who has a 10kg weight advantage, Genge was penalized for leaning into the scrum. Brodie Retallick claimed the lineout and the visiting field piled in to push Codie Taylor for a second down in nine minutes.

All Blacks scrum-half Aaron Smith enjoyed life, prompting the hosts to give them ‘easy outs’ whenever the hosts received the ball. Mathieu Raynal conceded a penalty from the penalty spot against England strikers, Owen Farrell, on the day of his 100th cap, losing his temper with the officials the whole time.

Jones admitted his side were pulverized in the first half, lucky they weren’t further behind after Rieko Ioane and Jordie Barrett both missed scoring chances. England wasted their chances for so long. Jonny Hill fumbled the ball, they missed kicks to touch it and were returned to the maul and the breakdown. All England had to show from the first half was three points from Farrell’s boot.

‘Is there anything we can do better?’ Farrell asked Mathieu Raynal as they walked down the tunnel for half-time, having scored his team’s only half-time points. The French referee resisted the chance to make a cheap gag.

Farrell received ankle treatment during the break and handed kicking duties to Marcus Smith, who scored the opening points of the second half. There was a flash of tempo and physicality as Manu Tuilagi burst into the All Blacks red zone, but the game ended with a penalty against Maro Itoje for locking. 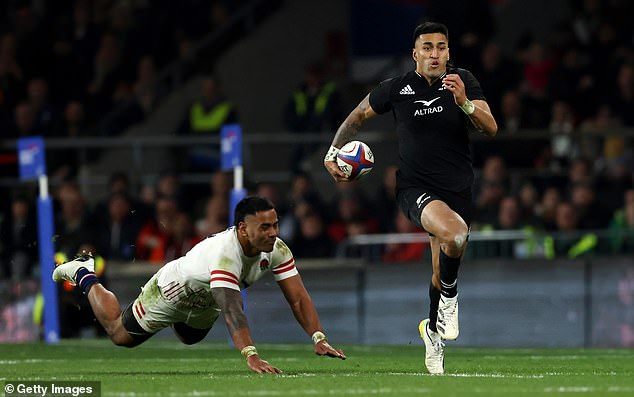 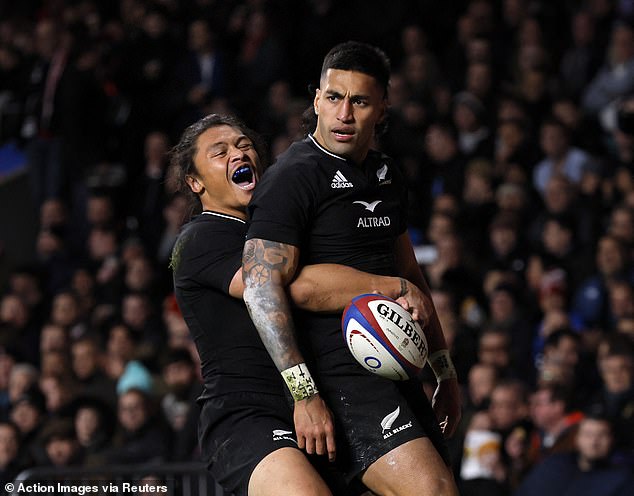 English frustration was there for all to see. Smith usually expresses himself with chicken steps and kicks, but at one point drew his opponents into scuffles against the ball.

And after 50 minutes, England were defeated by a masterpiece. Sam Simmonds had the ball dislodged from his grip and the tourists attacked from deep within their own halves. Beauden Barrett sent a kicking pass to Caleb Clarke, who transferred the ball to Ioane to charge clear to score across Twickenham. It was like watching the All Blacks of yesteryear.

Except these aren’t the All Blacks of old. It’s not the ruthless men in black whose jerseys were as powerful as armor. New kids like Smith, Freddie Steward, Dave Ribbans and Will Stuart didn’t buy into the stories told by their elders.

As time ticked away, Jones unloaded his bench and England played on instinct. Someone had sprinkled magic dust. After a drop goal from Beauden Barrett, Steward stole the restart and Smith lifted his head to run between two forwards. Beauden Barrett held him back in the tackle, earning a yellow card, and Stuart just about got the ball tied up.

With a one-man advantage, England went wild, while the All Blacks gave a masterclass in how not to close a game. England came out of their tactical straitjacket, running the ball from their own half, with the Ribbans pulling off a spectacular offload before Steward scored on the right wing.

And they kept coming, defying the odds. Henry Slade stepped in as third receiver, Mako Vunipola executed crisp lines, and Stuart blasted his way in to even the scores.

There was rowdiness and beer showers. Twickenham was on their feet, crying out for blood, buzzing with conviction, with an electric charge running through their legs. Their emotions had been thrown around like a Twickenham clothes dryer and they wanted the win. Smith had a chance to get the ball out of his 22 one last time, but suddenly that venom abandoned him and he tossed the ball into the stands for a bittersweet draw. 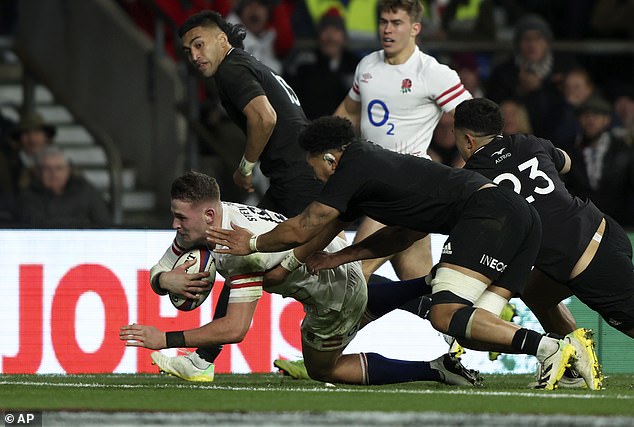 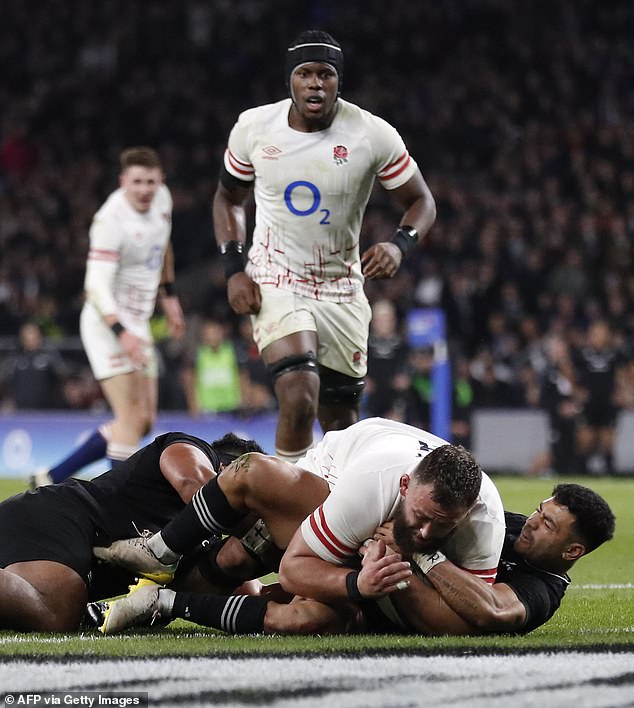