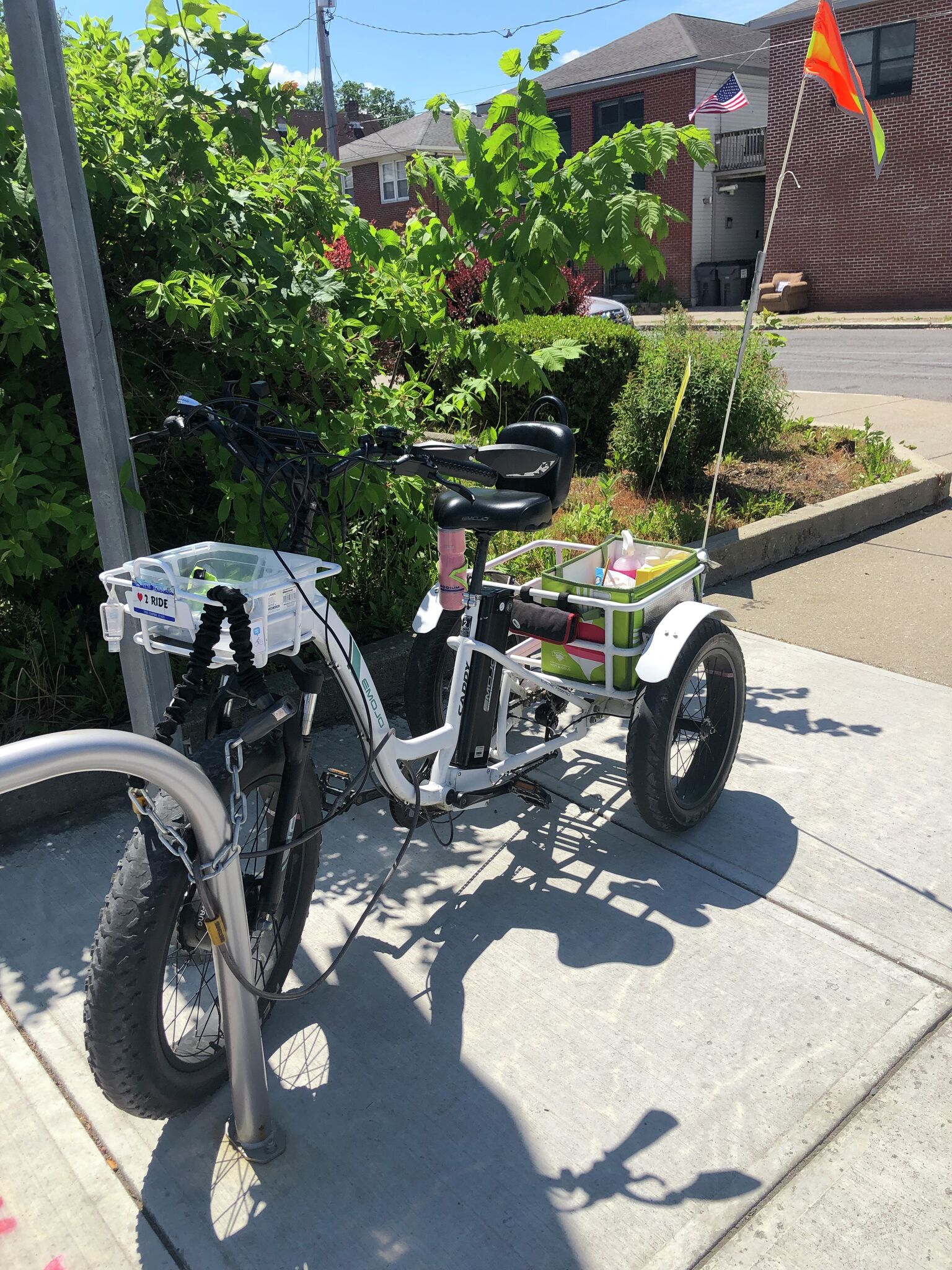 Electric bikes are all the rage

In the Hudson Valley, the recent e-bike climb has been as steep as our famous hills. A few years ago, Andrew Willner, an early e-bike user, said he was harassed by a Minnewaska State Park ranger for bringing his battery-powered e-bike into the park. Now, says Willner, e-bikes are mainstream enough that no one will flinch.

“Mohonk [Mountain House] had a similar rule, and then a year later they started offering power-assisted e-bikes to their guests,” Willner said.

For Willner – a Rosendale resident who lives on steep Breezy Hill Road near the Wallkill Valley Rail Trail – having an e-bike has opened up a world of two-wheeled adventure. Willner was already an avid cyclist, and as a sail freight enthusiast and founder of the Center for Post Carbon Logistics, he has long believed in non-fossil transportation. But it wasn’t until he saw a homemade e-bike in the back of a neighbor’s van about five years ago that he really fell in love.

“It blew me away. It looked like a little motorcycle,” Willner said. “It was black and tough and had these big tires on it. It was so intriguing to me.

The bike’s owner put him in touch with local machinist Joe Turco, who helped Willner put together a list of parts he’d need to DIY his own fat tire e-bike.

“I look at this bike now, and I still ride it sometimes, but it’s pretty gross. But it works perfectly. I love it,” Willner said.

These days you don’t have to build your own to get a little more zip in your ride. In recent years, the quality and availability of e-bikes of all kinds has grown significantly in the United States. Even some of the region’s most avid traditional cyclists are warming up to the e-bike trend — like Billy Denter, a bike assembly expert and mechanic who owns Overlook Bicycles in Woodstock and helps Hudson Valley residents going out on two wheels for nearly two decades.

Denter is embracing change: e-bikes make up about 10% of his business and it’s growing, he says.

“We didn’t feel threatened by the concept,” Denter said. “We had to delve into ongoing training and train our repair technicians so that we felt confident about any mechanical issues that might arise.”

Having a little extra assistance while pedaling helps some people hit the road, especially if they’re not fitness paragons. In Denter’s opinion, that’s a good thing no matter what kind of bike they ride.

“We are in a very hilly region. I think the terrain deters a lot of users,” Denter said. “There are a lot of people who could become more serious cyclists if they had the opportunity to get out there and experience it.”

I was one of them until I recently purchased a Model S from the Electric Bike Company, a California company that sells American-built beach cruisers. I’ll admit I was wowed by the bike’s racing green enamel and classic beach cruiser beauty, but it was the engine I really fell for. Over the past month, I’ve put about 125 miles on its flashy tan and white tires, and started riding it on 30-mile trips to my part-time bartending job. Even the strenuous slope of Belleayre Mountain cannot stop me.

Recent research on how people use e-bikes confirms that when people have an e-bike, they tend to get more miles than conventional cyclists and get similar fitness benefits from their riding. Pedal assist makes hills much less intimidating, but e-bikers still put in enough effort to get a good moderate-level workout. For most pedal-assist bikes, the experience is much like riding a regular bicycle. It’s just a little less moist.

“I have to explain to people that they still have to pedal,” Denter said.

For some people, an e-bike can be a ticket to independent mobility. In 2020, Darlene McGraw, a disability advocate at Halfmoon who has seizures that prevent her from holding a driver’s license, purchased a pedal-assist electric tricycle with a rear cargo basket. It changed his life.

“I call it Caffeinator,” McGraw said of her ride. “She has energy, just like me.”

McGraw has balance issues and asthma, and cannot ride a two-wheeled bicycle or pedal long distances without motorized assistance. But with the tricycle, McGraw could get groceries, doctor’s appointments, and work without relying on help from friends and family. Freed from having to wait for multiple bus transfers, she could buy a pint of ice cream, knowing the tricycle would get her home before it melted.

McGraw’s newfound freedom didn’t last: In February, an elderly driver pulled up in front of her and made a sharp right hook, a common and dangerous scenario for cyclists on city streets. The ensuing collision damaged the tricycle and McGraw is still trying to get it repaired.

“I can’t even explain how much I miss her,” she said.

Although its wheels are currently out of service, McGraw is still active in advocating for disabled cyclists. She asked the city of Saratoga Springs to keep the roads in better condition and lobbied for New York State to adopt the Accident Victims Rights and Safety Acta package of legislation to make roads safer for cyclists and pedestrians.

With most high-quality e-bikes retailing for over $2,000, going electric can be a big step if you don’t know what to expect. Denter advises anyone curious to hire one and take it for a spin.

“You can book online and take a little ride on an e-bike, and see if that’s something you dig,” he said.

Lissa Harris is a reporter for The River Newsroom and other publications, in the Hudson Valley and beyond. She lives in Margaretville. Follow her on Twitter at @lissaharris.