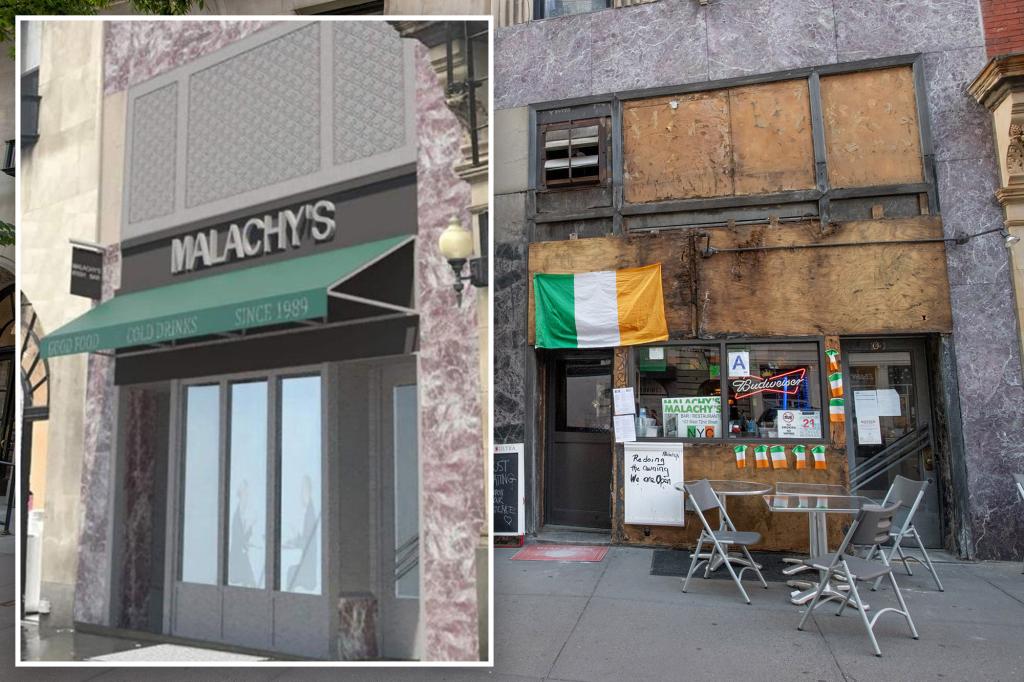 This bar seems to have one too many.

The Upper West Side watering hole Malachy’s has been in the process of replacing its facade since late April, and what’s left of its gruesome exterior are scraps of dilapidated plywood — and a few Irish flags.

“Obviously the current situation looks more like a disaster area and needs to be fixed,” said Jon Hill, who leads the UWS’ Architecture Instagram handle. “Projecting that kind of vibe isn’t good for the company, the neighborhood, or the city.”

The Irish – and many others – the eyes of the neighborhood are not smiling.

“It’s a shame to leave something like this on an otherwise very pretty block,” said Haley Fox, owner of Alice’s Tea Cup, a block away. “At least put some paint on it.”

But Malachy’s — a staple on West 72nd Street near Columbus Ave. since the late 1980s — is the kind of place people love “because it’s old and ugly,” insisted Mike Mishkin, owner of news site ilovetheupperwestside.com.

“It’s gone from a dive bar to a burnt down crack den, but hopefully it will look good once they’re done renovating,” he said.

Owner Theresa Kelly McCarthy explained that renovation projects – replacing the torn awning and adding windows that open – were in the works before the pandemic.

“We said, ‘Maybe it will attract more people,’ said the Irish native, who was a waitress there before buying the bar in 2015 with Billy Raftery.

It was his idea to add the flags.

“I said, ‘We don’t have anything there, let’s put the Irish flags all around. And I cut them on St. Patrick’s Day [decorations] and I pasted them all on,” she explained.

McCarthy claimed the bar hadn’t received any negative comments about her appearance.

“They just thought we were exhausted,” she said.

Work began in late April, but the project has stalled as contractors await additional permits.

Some residents said the bar’s condition has given the neighborhood — best known for its strollers and dog strollers — a hip new vibe.

“I actually think it looks pretty cool as a little piece of the East Village on the Upper West Side,” said Sophie Orlich, who lives a few blocks away.

And that could be good for his bottom line.

“I thought it was closed, but I kept seeing people coming in and out and was intrigued to check it out,” said Matt Meoni, a Bed-Stuyvesant resident who worked in the area.

Man stabbed to death after leaving Northwest Side bar