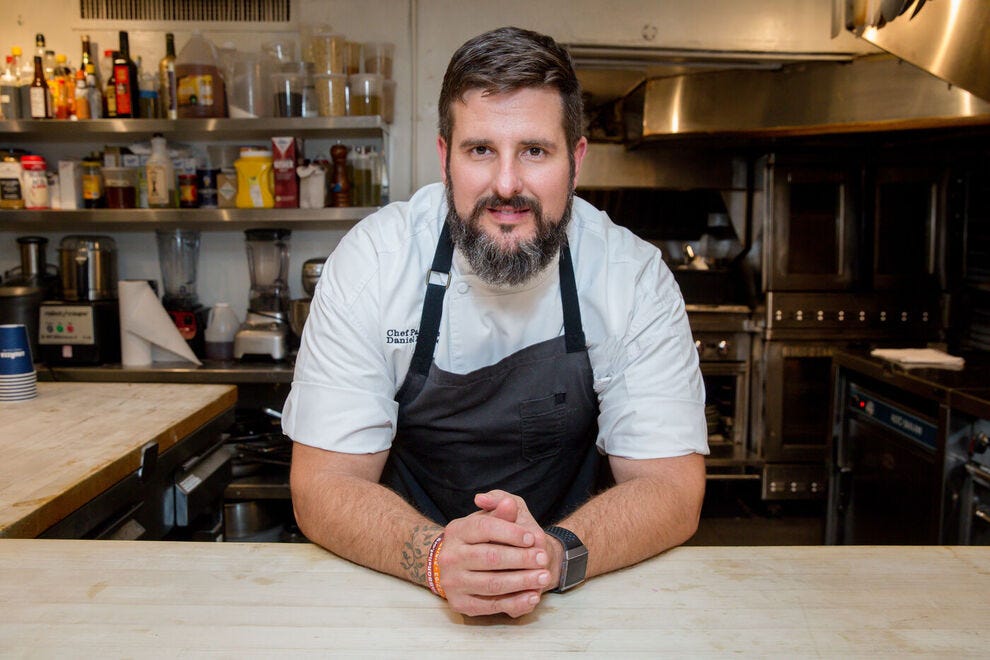 Food enthusiasts know that Charleston, SC has been home to a thriving culinary scene for decades, with a concentration of notable restaurants mostly located in the city’s downtown area. Over the years, the area’s list of innovative restaurants has also grown in the neighboring Lowcountry, which includes the surrounding areas of Mt. Pleasant, John’s Island, West Ashley and James Island.

Spending much of his career in the Charleston area, chef Daniel Doyle is known for being instrumental in creating modern versions of Lowcountry dishes at several groundbreaking restaurants (including Poogan’s Porch) across the city. He is currently the Executive Chef of the award-winning Fish House at the Beach Club at Charleston Harbor Resort and Marina, located in Mt. Pleasant, just minutes from town.

The Fish House is an upscale yet laid-back beach destination with a menu that showcases Doyle’s distinctive take on regional seafood specialties. Growing up in North Carolina, he honed his craft at a number of restaurants in and around Charleston. Recently, he has appeared on a number of national and international food and travel television shows, including the Food Network’s “Chopped” series.

Doyle points out that the region’s ever-changing culinary community has seen a nuanced pivot — from Southern-style dishes to more globally influenced cuisine. He says, “I think Charleston has always been known for its amazing, high-quality food. However, since my arrival in 1997, I have noticed that there has been an explosive growth in the variety of food types available. It used to be almost exclusively Southern food, but now there’s food in Charleston from all over the world, and it’s all done really well. From French brasserie style to Middle Eastern barbecue to Korean barbecue, it’s all here.

Doyle adds, “The food scene here is very competitive, and there is so much amazing, high-quality food available to settle for nothing less. Also, I would recommend people to eat as much food as possible made with local ingredients, especially seafood, which is excellent here.

Doyle thinks Charleston has more to offer than its classic downtown spots, and visitors who branch out and take a short drive (or quick water taxi ride) around the area are sure to be rewarded with more. getting an unexpected taste of the culinary scene. surrounding the city.

For foodies looking to explore the area beyond the city, Chef Doyle shares another side of Charleston and reveals his own favorite restaurants outside of downtown: 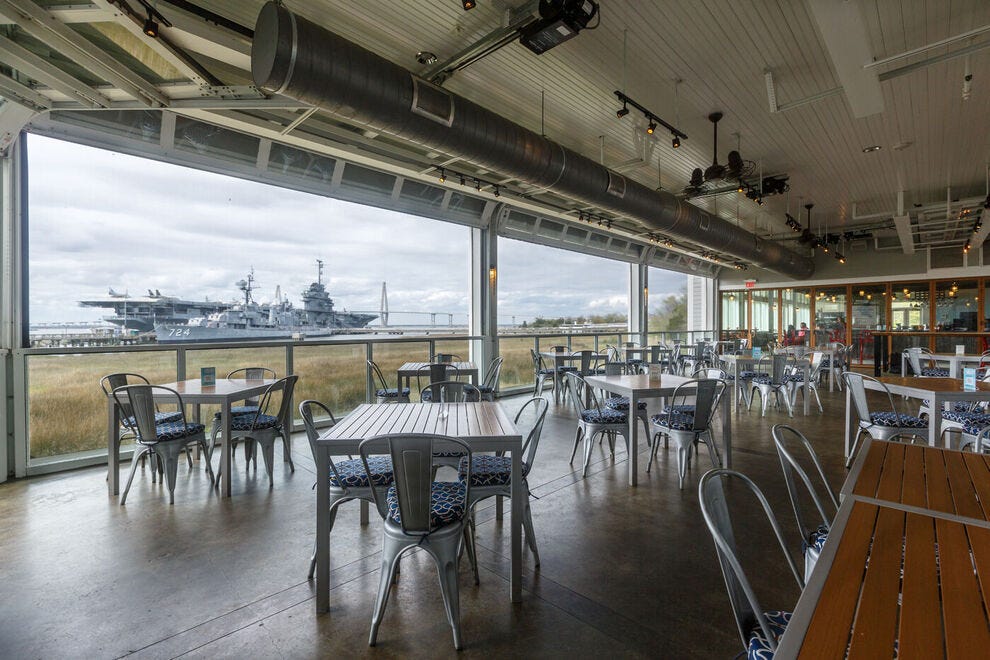 Stepping into his role as Executive Chef at the Fish House in February 2020 proved difficult to say the least (due to COVID), but Doyle forged and focused on the positives, while making some adjustments in this An upscale, laid-back harborside destination it’s bright, sunny and flooded with light, with large windows and an expansive bar area.

Offering picture-perfect marina views, the restaurant is located at the Beach Club at the Charleston Harbor Resort and Marina, a sprawling destination that draws visitors and locals alike. With nearly 100 rooms and suites, the resort has multiple pools, a spa, private beach, outdoor patios, multiple bars, and fire pits. Best of all, it’s a quick water taxi ride to downtown Charleston (about 15 minutes) and other area locations. 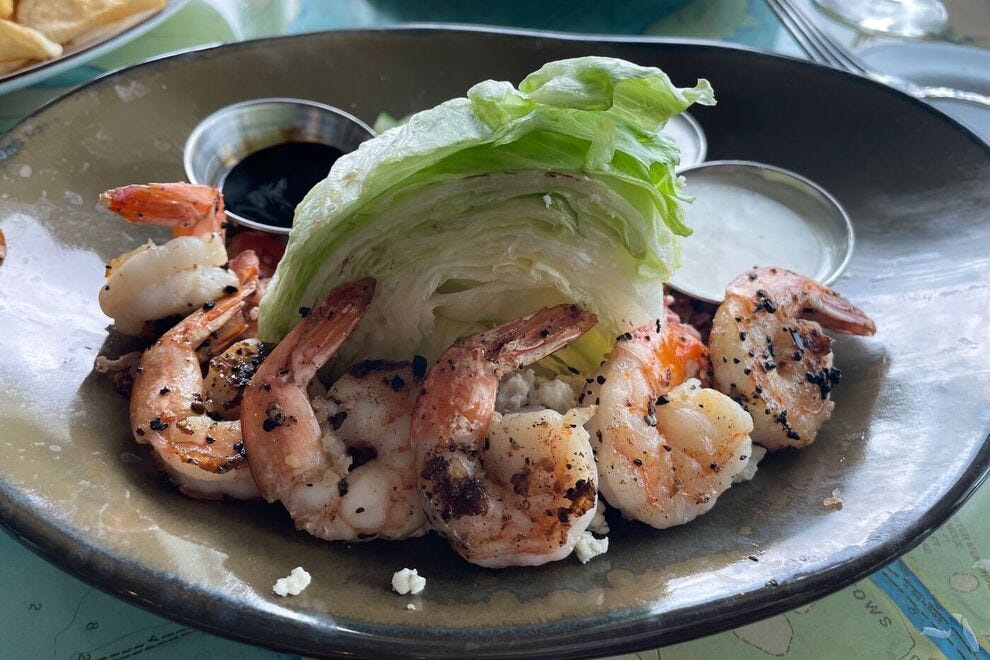 Doyle said: “During the pandemic I have been focused on refining our menu to be lighter, more fun and more seasonal. We use local suppliers whenever possible and create many of our dishes based on what can be found in the area, especially local fish like snapper, grouper and wahoo, in addition to local produce like okra, Bradford watermelons and pumpkins. The menu is my way of honoring South Coast cuisine.

Guests love the food and keep coming back for the panoramic views from the Fish House, especially the spacious rooftop bar. “There’s no better view of Charleston Harbor than from The Fish House,” he said. “And there is no bad place in the house. From your chair, you can see the entire marina, including the USS Yorktown and USS Laffey, all with the Ravenel Bridge and downtown Charleston as your backdrop.”

He revealed, “My dad was actually a cook stationed on the USS Laffey in Vietnam, so it’s a really cool thing to watch from the Fish House and have that full circle moment. If he hadn’t done that, I wouldn’t be where I am today. 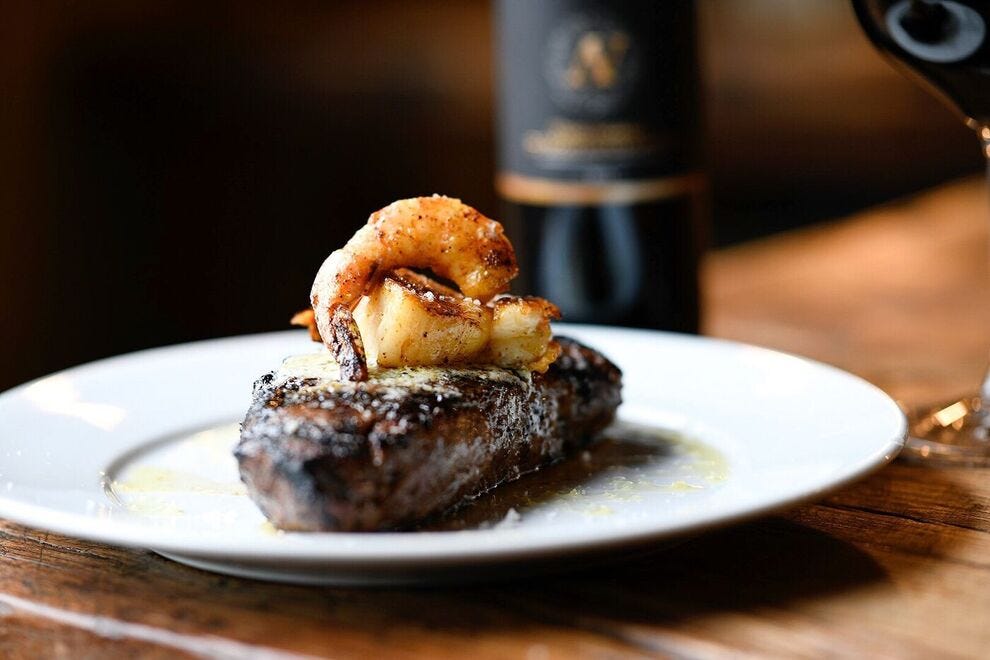 A Mt. Pleasant classic, Red Drum holds a special place in Doyle’s heart — after all, he proposed to his fiancée, Kelly Hill, at this restaurant last May.

Upscale yet friendly destination, Red Drum offers “something for everyone” on its South-by-Southwestern-inspired menu, including fried shrimp, seared sea scallops, pork chops, steaks and more again.

Doyle says, “I can bring friends here for a fancy meal, but I also know our kids love it. Red Drum is fantastic as the menu has a lot of variety but isn’t overly done. The chef lets the ingredients be the ingredients, and the overall vibe remains unpretentious, which is how I like to cook too. My favorite dish on the menu is the wood-fired chicken breast. It’s grilled chicken with crispy tortillas, asparagus, avocado, garlic cream sauce and mashed potatoes – it’s really good.

If you’re looking to chat and make friends, Red Drum is known to be a warm and welcoming place. Doyle suggests hitting the bar because “the bartenders are all great and fun, and you’ll be neck and neck with many Mt. Pleasant locals.” 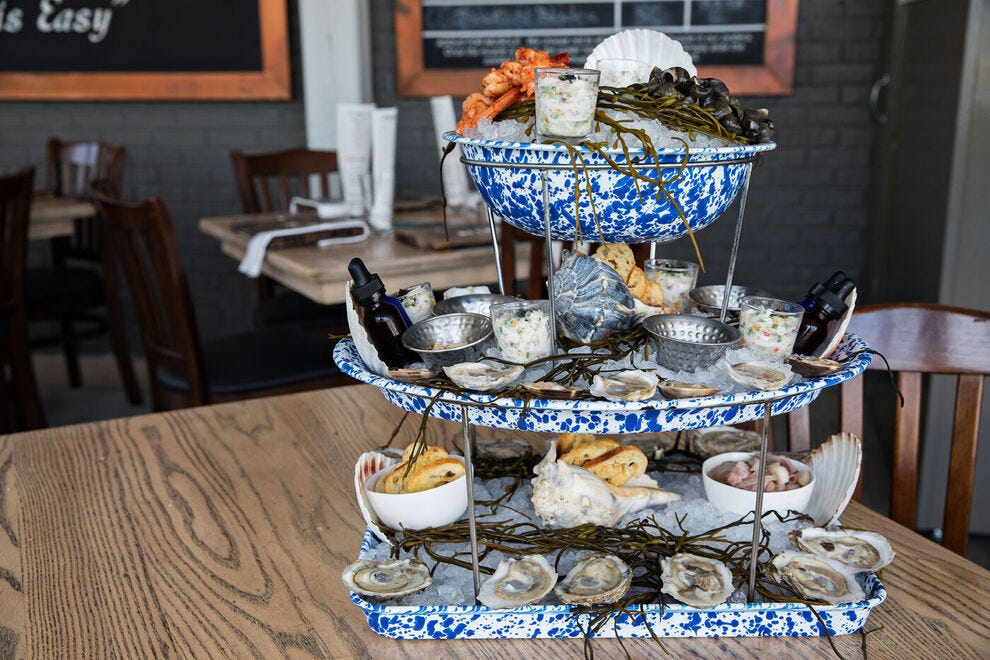 Nico is a modern oyster bar and French brasserie-style restaurant in Shem Creek. With an elegant and airy dining room, Nico offers much more than shellfish. Here they serve casual fare (like a wide variety of sandwiches and salads) with a European twist.

Doyle is a long-time friend of the owner, Nico Romo, who comes from France. “He’s one of the most talented and humble people you’ll ever meet. I’ve known him for over 10 years – he took over at Fish in downtown Charleston for a while after I left, and I love coming here.

Doyle makes a suggestion to future guests: “A lot of people come for dinner, but my pro tip is to come for brunch and have oysters or a classic French dish like a croque madame, croque monsieur, French fries or ham and gruyere. Omelette. They also do one of the best lobster rolls I have ever eaten. You can’t go wrong with the food.

Fun fact: you would never know it, but Nico was a Pizza Hut. Doyle says if you look closely, you might be able to tell. “They did an amazing job with the interiors and the overall vibe of the place.” 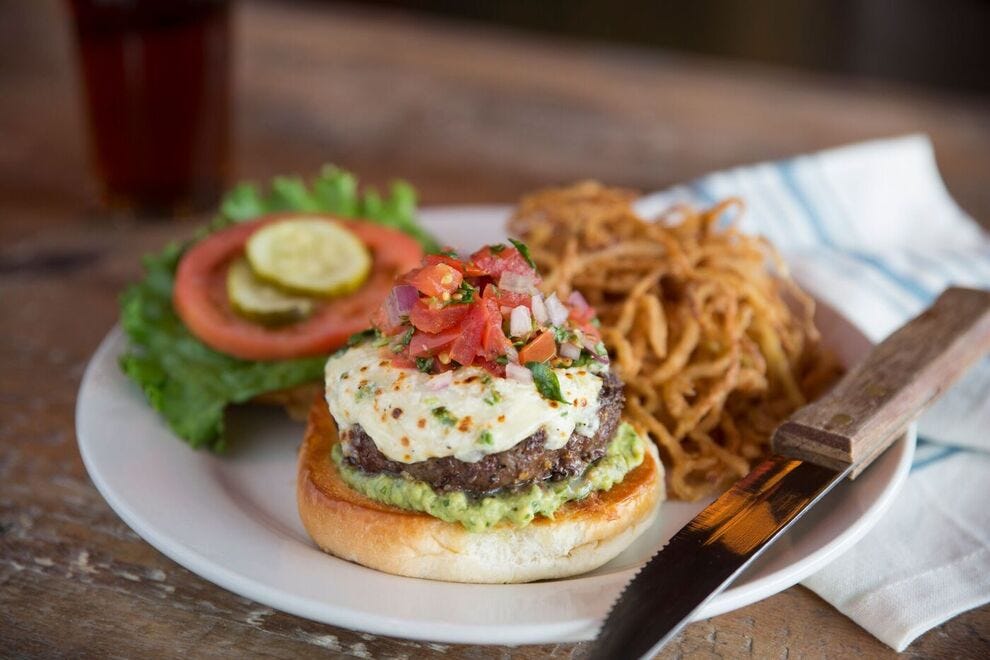 Poe’s Tavern is a tribute to the famous author, Edgar Allan Poe, who was stationed nearby in the 1800s while in the army. This restaurant is an iconic little place on Sullivan’s Island, known far and wide for its great burgers, all named after Edgar Allan Poe’s famous works (such as The Black Cat, Pit & Pendulum, and The Tell-Tale Heart).

Located just two blocks from the ocean, Poe’s is a charming seaside landmark with a menu that also offers an array of fresh and simple items, such as salads, soups, and fish tacos. It is often busy with a beach-hungry crowd.

Doyle has been a regular customer for years and says, “This is the place to stop on the way to or from the beach, or to visit when you want something other than seafood. Good they have a small kitchen, they prepare hundreds of burgers a day. My favorite is The Sleeper, with blue cheese and buffalo shrimp.

Doyle reveals that Poe’s is a family favorite. Her kids love it – and whenever her parents visit, they always enjoy a burger on the front porch of Poe’s. 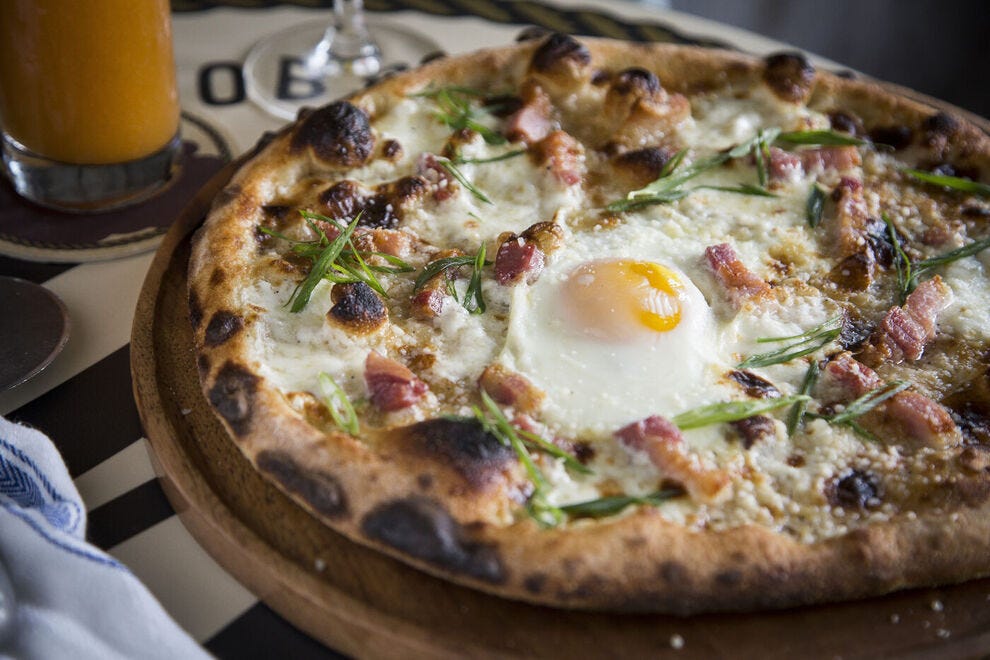 With rustic chic interiors and a bustling open kitchen, The Obstinate Daughter on Sullivan’s Island is filled with vibrant energy. This lively and popular restaurant attracts locals and visitors alike, and the seasonal menu offers a selection of daily specials and plenty of inventive offerings to share, too.

Doyle mentioned that owner Jacques Larson is “super talented and has worked all over Charleston with great chefs” and points out that The Obstinate Daughter is an ideal lunch break.

He says, “A lot of people come here for special occasions, but I love taking my fiancée and the family on their way to the beach. Lunchtime is when I like to get their salads, like the roasted beet salad or the shrimp roll. The meatball sandwich is also one of my favorites. They aren’t usually known for their more decadent dishes, but that’s where I tend to gravitate. The lamb sausage pappardelle is delicious and The Rutledge is my favorite pizza.

Doyle advises against skipping dessert. “They also have an ice cream shop downstairs which is perfect for a hot sunny day.” 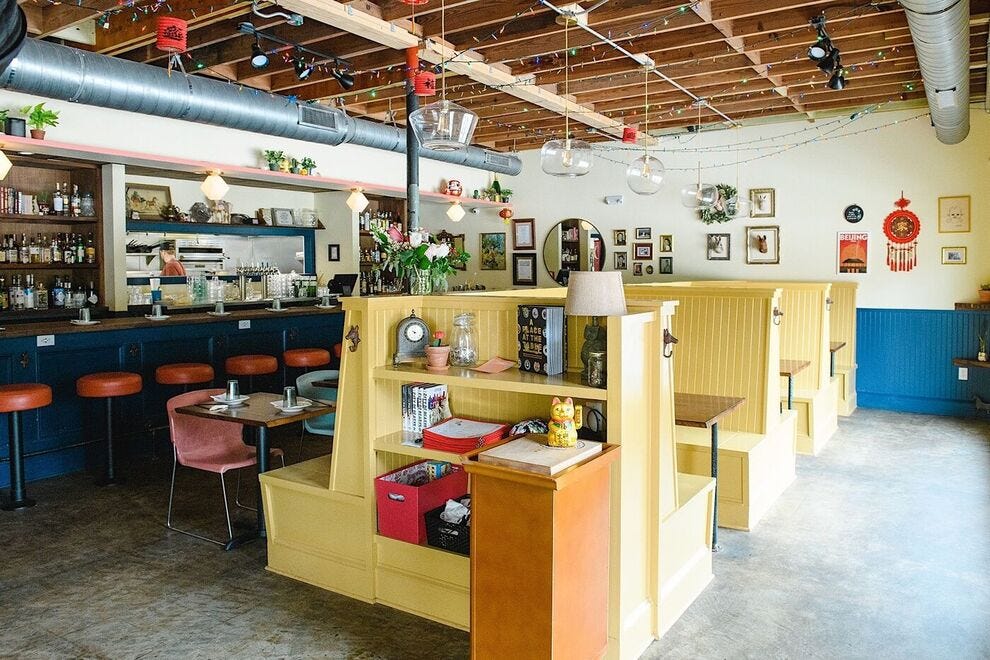 Park Circle in North Charleston has undergone a lot of revitalization over the past decade, and Doyle encourages foodies to make it a point to dine at Jackrabbit Filly, which opened in 2019 by Shuai and Corrie Wang, who previously rode in town in a popular restaurant. truck (called “Short Grain”).

Fun and colorful with an eclectic style, the variety of menu items at this restaurant is as creative as its whimsical decor. Doyle says, “Jackrabbit Filly is my favorite, serving up some of Charleston’s most inventive dishes right now. This place has amazing food and great service, but is still unpretentious. Personally, I recommend the pork and cabbage dumplings and the Japanese fried chicken.

He added: “The crowd is mostly local and I would recommend making a reservation. It’s really nice to sit outside on milder nights to take in the vibe on this side of Charleston. If it’s really busy, I like to sit at the bar.

Pro tip: Chef Doyle recommends driving or taking a ride-sharing service here, as it’s about 20 minutes from the Beach Club or downtown Charleston.