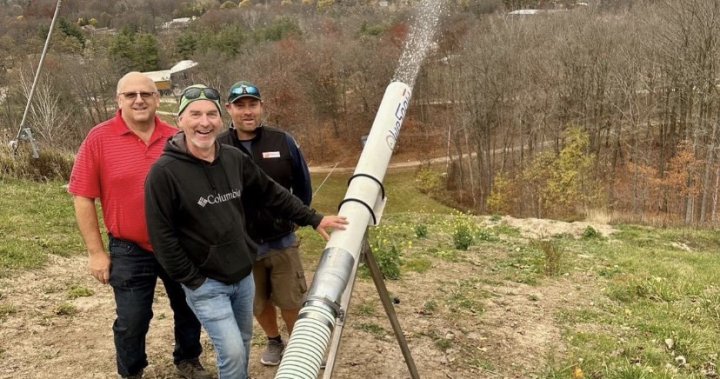 The organization unveiled its new Positive temperature snowmaking unitwould have been the first such machine in the country.

“We’re in production right now, it’s a beautiful day, about 10 degrees (C) outside, and it’s not making tons of snow, but we’re producing snow all the way up where it’s most difficult for us to use our traditional methods of snow production.

Thody said the unit can still produce snow in 17C weather, and the goal is to be able to keep their West Hill field open longer and sooner.

The story continues under the ad

“We’ve had odd days of production temperatures using our traditional snowmaking equipment, but the rest of the slopes are pretty white right now,” he said.

The local non-profit ski resort was able to purchase the new “industry-leading” equipment with support from the federal government’s Economic Development Agency.

“It was a partial fund. A total installation was just over a million dollars,” Thody said. “This rather expensive piece of equipment would have probably taken us several years to be able to purchase…but I think it will really help keep Boler in business for years to come.”

He added that although the opening date for the ski resorts has not yet been announced for this year, “I think we are only a few days away from production. But we need more running time on the snowmaking system behind us.

“We have just celebrated our 75th anniversary and are looking forward to another great winter season,” concluded Thody.