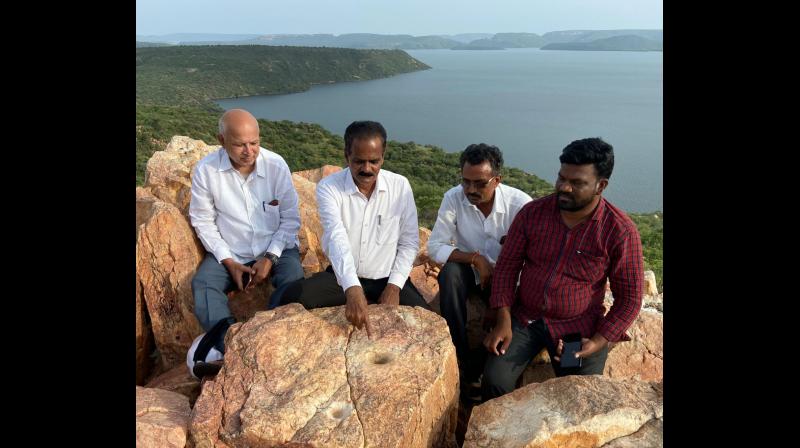 4000 BC Neolithic grooves found atop Pavuralagutta hill in Nalgonda

Nalgonde: Archaeologist Dr E. Siva Nagi Reddy and his team found Neolithic grooves dating back to 4000 BC on a hill on the left bank of the Krishna River at Pavuralagutta de Pedda Adicharla mandal in the Nalgonda district.

Dr Nagi Reddy and his team spotted the grooves at the top of a quartzite slab on the hill during a five-day program to train tour guides organized by the Buddhavanam Project,

He said that the place where the grooves were located was at a height of about 1,000 feet from the bed of the Krishna River and 150 feet from the water level when the Nagarjunasagar reservoir is full. He said the hill was the habitat of the pastoral Neolithic people.

The grooves were between 3 and 5 cm in diameter and 1 cm in depth. They were formed by crushing granite or dolerite sling balls used to hunt birds and animals damaging crops.

The team also identified a few rock shelters and natural caves inhabited by the Neolithic people in front of the site as well as a large number of grooves. He revealed that the place could have been the center of the production of Neolithic tools such as Celts, scissors and slingshot bullets.

Dr Nagi Reddy said the Neolithic site of Pavuralagutta was picturesque and offered panoramic views of the Nagarjunakonda Valley, a range of hills and the huge man-made reservoir of Nagarjunasagar. This has made it an ideal place to develop as an archaeological and ecotourism destination.